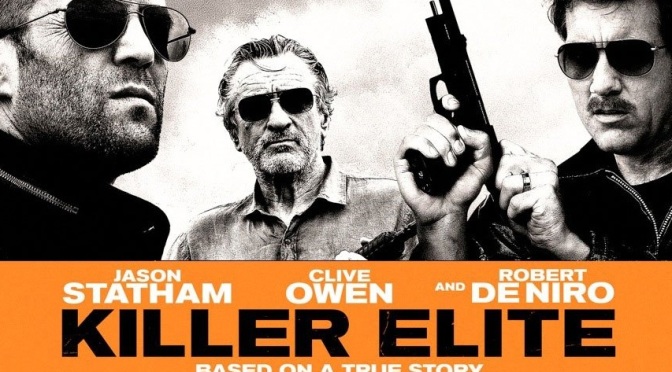 Statham, Owen, DeNiro and The Scorpions Team Up – and they are going to rock you like a hurricane.  Below is the new trailer for Killer Elite which stars the aforementioned Jason Statham, Clive Owen and Robert De Niro. Watch, enjoy, absorb and once you quit fist pumping, meet me down below for a brief discussion.

So in Killer Elite (not to be confused with 1975’s ‘The Killer Elite’) apparently Owen and Statham, who are both elite killers, aren’t friends, but Statham and De Niro are. And then there is going to be a lot of fighting and car chases and gun play and explosions to sort out the issues.  It’s basically a post-modern Hamlet.  Alright, so the plot is probably not Shakespearean, or even on par with most of our Best Action Flicks of the 90’s, but if you’re anything like me, that’s okay.

As the good Dr. Kronner has said many a time, we often lack masculinity in our culture.  We forget that it is alright to like a movie that that is full of well choreographed, and well shot action scenes where shit blows up.  If we get a kick ass plot too like in Sin City, that is just a plus.  Killer Elite promises me action, nothing more, and I need it, you need it, and for crying out loud the children of America need it.  Won’t somebody think of the children!

Also, this may be the first post-Katrina use of “Rock You Like a Hurricane” in a movie trailer.  It gets a gold star for that alone.