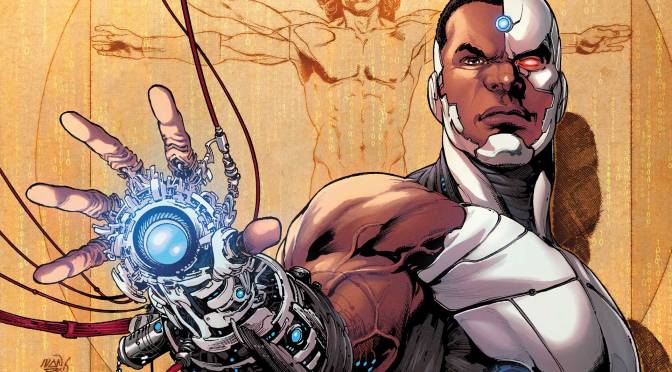 The Justice League aren’t my standard heroes of choice.  The roster boasts itself with Apex heroes; mighty, infallible heroic additions. But when Cyborg was introduced in The New 52 as a part of the new Justice League, I suddenly took interest in their adventures.  Since then we’ve seen the evolution of what could be one of comics’ most dynamic characters, and he’s finally received his own book.

Cyborg offers a complexity that we rarely see in other superheroes. Most heroes of great strength or power refrain from using their abilities to the highest extent. It’s a Man vs. Monster classic scenario. It’s the very thin lead we see Batman balance carefully. He chooses not to kill, because his violence would make him no different than the rest of Gotham’s colorful rogues gallery.  The probable monstrosity is a story we’ve seen countless times as readers, but Cyborg’s narrative offers a different lens, being half machine.

Cyborg issue #1 offers an in-depth look at the humanoids thoughts, and David F. Walker does an incredible job of capturing  core Cyborg – articulating his incessant battle of being viewed as  human, monster or machine. It’s clear that Cyborg identifies as a culmination of all three. 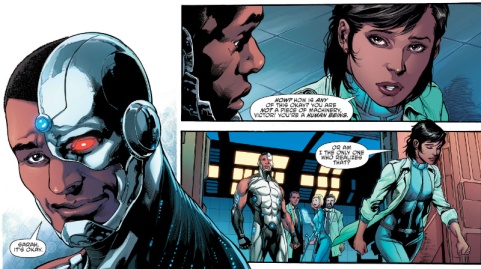 Victor’s identity is what takes center stage in the first issue as readers get to follow his mental (and at times) verbal dialogue with his father and the S.T.A.R. Labs team.  One of the most intriguing elements during Victor’s internal dialogue is seeing him repress the needs of a human, such as affection and recognition.  Admittedly, it’s easy for readers and the characters of the DC universe to dismiss the fact that Victor is in fact a walking hybrid, but despite his tech-infused physique, it’s human Vic we relate to, such as his flailing relationship, or lack thereof with his  aloof father.  Aside from his daddy issues, we’re briefed on his history with the League, (illustrated beautifully by Aquaman artists Ivan Reiss and Joe Prado) including one of two deaths (his deaths) he’s experienced, and a possible immersion of a Cyborg 2.0 tech. 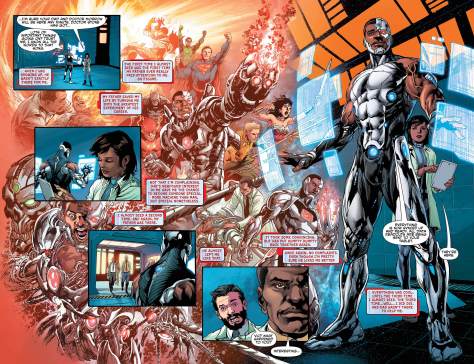 Cyborg’s book has been exhaustively overdue. Not only is Cyborg the only JL member of color (though his addition isn’t defined by his race), he has one of the most distinct and inventive stories out of the lot.  The struggle with maintaining one’s humanity may be a universal truth, as we’ve all struggled on accepting who and what we are.  Cyborg issue #1 could be the start of an era for the titular hero, and I’m pretty damn excited about. Be sure to check out issue #1!

2 thoughts on “Could Cyborg Be A Gamechanger for DC?”