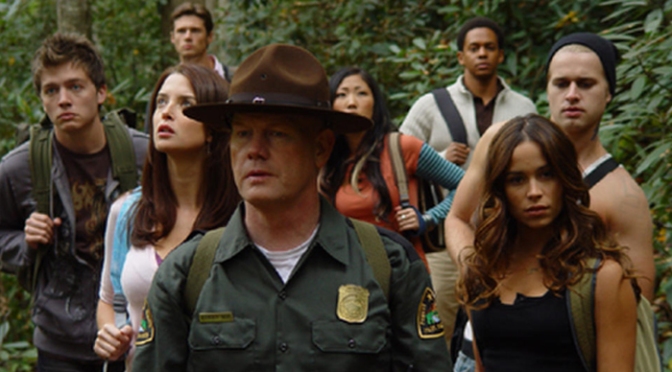 First off, let’s not associate any name resemblance between this rancid dog turd of a movie and our beloved Grizzly Bomb.

One is awesome, one is not. Grizzly Bomb is beautiful; Grizzly Park is ugly as sin. Understood? Good, then let’s start, shall we?

*Spoilers like a mother effer – because you shouldn’t care*

Ok, so here is the official synopsis:

Eight troubled young adults are sentenced to a week of community service in a remote California forest range called ‘Grizzly Park’. Under the supervision of the stalwart Ranger Bob, the group is given the opportunity to seek redemption on their journey through the forest. While Ranger Bob seeks to provide guidance to the young adults, an escaped serial killer with an insatiable blood-lust has also found his way into the park with every intention of disposing anyone in his path. But he is not the only predator in these woods; a nine foot tall, thousand pound ravenous Grizzly bear has also set his sights on stalking the group and attacking them one by one, leaving the group to face their ultimate challenge…survival.

Some nights when I’m writing I like to turn on a random, bad horror movie on NetFlix.

Well, tonight it was Grizzly Park and damn was it bad. I usually like to have a laugh during B movies, but this one couldn’t get one chuckle out of me. The most famous person in the movie was Glenn Morshower who starred in minor roles in both Transformer movies, and also played ‘Secret Service Agent Aaron Pierce’ on 24. In Grizzly Park, he plays ‘Park Ranger Bob’, the man in charge of overseeing the group of the young imbeciles who are doing community service. These morons are responsible for misdemeanors ranging from computer hacking to prostitution.

For some integral-to-the-plot reason, they are doing their community service picking up trash in a very remote forest where no other campers or hikers are to be found…so there is a lot of trash.

There is also an incredibly unnecessary subplot about an escaped serial killer being on the loose in the woods. Funny thing is, he doesn’t kill one of the community service kids because he instead tries to have a knife fight with a killer bear. Brilliant,  brilliant man. The bear wins big time eating the serial killer’s face off, much to my delight. The rest of the movie was a ‘paint by numbers’, one-by-one kill fest.

All of the offenders? Eaten by the bear. However, four of them were actually killed off-screen, which needless to say, was quite disappointing.

Actually, take that back, there was one huge twist; the first girl to die was run down and killed…by a wolf. A fricking wolf. I thought this was Grizzly Park?

Probably the most unexpected way of someone dying occurred in the last minutes of the film: One of the girls, Bebe, was questioned in a brilliantly acted scene by the guys if her boobs were real or silicone. She awesomely replies with, “Silly cone?”, and insults women everywhere with her stupidity. So after talking to someone on the phone about how everyone was dead and she didn’t give a rat’s ass or learn anything, she walks outside to find the bear waiting. The bear takes a swat at her hitting her chest, and a bloody “Silly cone” implant flies and hits a tree. She, of course, dies from that.

Thank you Grizzly Park, because the whole movie my only questions were “Are Bebe’s boobs real?” and “Why am I watching this movie?”.

The very last scene reveals that the bear killing everyone is, in fact, anger Bob’s pet and buddy. He takes criminals out to pick trash in the woods hoping they will change, and if they don’t he has his effing bear kill them. CLASSIC! Now I must go vomit.

If this sounds awesome, maybe I described it wrong. I’m not saying don’t watch the movie, by all means, do, you may get plenty more out of it than I did. But you’ve been warned.

I understand what they were aiming for, but they just didn’t get there. This movie gets a well deserved 0.5 of 5 on the Grizzly scale. It earns this dismal score for the uninspired agony it put me through, and the most off-screen deaths I’ve seen in a horror movie! Scandal!