With the new Marvel movie lineup announced almost a year ago, it is no surprise that the popularity of the comic counterparts have gone up; specifically, Inhumans. For fans of Agents of SHIELD on ABC, the Inhumans have featured heavily in the last season, which is an obvious build up for the upcoming 2018 film version. No doubt the Inhumans are the MCU’s way of getting enhanced humans on the big screen with all the rights to the X-Men franchise under lock and key at FOX.

However, one of the qualities of comic books that remains untarnished is the endless possibilities for crossovers. Marvel has set up seemingly quite a crossover between the Inhumans and their enhanced brethren, the X-Men. 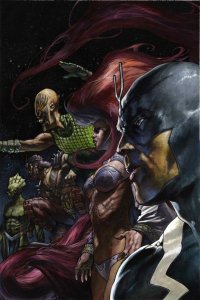 For those unfamiliar with the Inhumans, they are a clandestine group of people whose ancestors had been genetically modified to possess powers by the alien race known as the Kree. But their powers, unlike the X-Men who are mutants, can only be accessed by exposure to Terrigen Mist, which has largely disappeared from the Marvel Universe following the events of Infinity. Fortunately for the Inhumans, a new supply of pure Terrigen Mist has been found in Marvels “All-New, All-Different” universe. 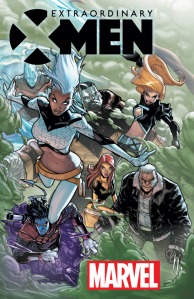 Historically, Inhumans and X-Men have gotten along fairly well, seeing as they are both usually feared and/or hated by normal human society. However, with the new discovery of Terrigen Mist comes something much less fortunate for the X-Men. In the first issue of Extraordinary X-Men by Jeff Lemire, Storm is seen explaining to a time hopping, young Jean Grey that not only is the Terrigen Mist causing illness and death to living X-Men, but it is also sterilizing them, meaning this could be the last generation of mutants.

Both Inhumans and X-Men constantly battle with the possibility of extinction. In Messiah Complex, Scarlet Witch had a major meltdown and basically attempted to wipe out all of mutantkind. Cinematically, the X-Men have been at constant war with mankind for the right to live. 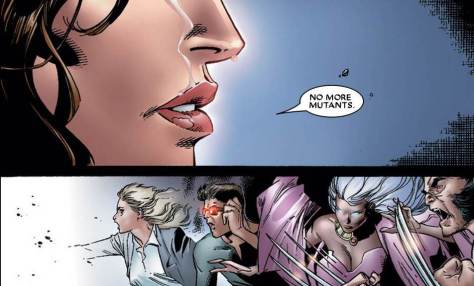 For the Inhumans, not only have the faced extinction a number of times in the comics, but also in the TV series Agents of SHIELD, where after Skye (Chloe Bennett) finds out she is in fact Inhuman, the whole race experiences a battle that potentially forces extinction onto them.

Inhumans rely on the Terrigen Mist to gain their powers and become their “true selves,” in order to avoid extinction. Conversely, the X-Men face extinction with it’s very existence. This will be an interesting crossover as there is no clear right or wrong. I think the best conflicts are the ones that don’t have a true bad or good side. Hopefully this arc delivers and I can’t wait to see what is in store with the ‘All-New, All Different’ X-Men!

For more on Marvel’s merry band of mutants check out the Marvel ’92 Variants, or  learn more about Agents of SHIELD ‘s Adrianne Palicki’s Possible Spin-Off, and be sure to check out our most recent Marvel/Netflix Update for more on Jessica Jones, Daredevil and the Punisher!