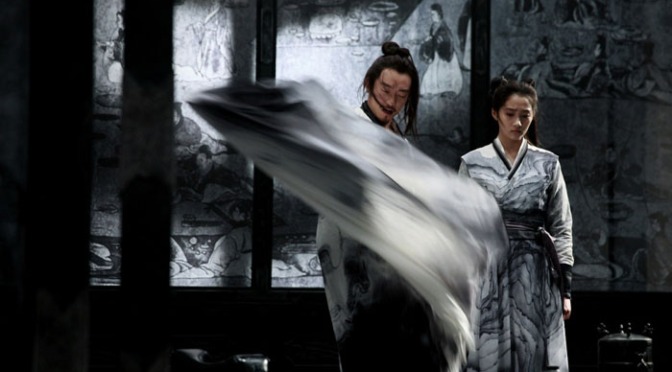 An international teaser trailer for Shadow, the latest film from acclaimed Chinese filmmaker Zhang Yimou (of Hero, House of Flying Daggers, Curse of the Golden Flower, The Flowers of War, Coming Home, The Great Wall) has debuted online. The film is a re-imagining of the classic Three Kingdoms story from Chinese history and is yet another martial arts epic.

There is no translation on the clip yet, but as per Zhang Yimou’s reputation, it’s as visually gorgeous a piece of moviemaking as anything you’re likely to see. Check it out below:

The film is reportedly set in the Three Kingdoms Era of China, approximately 220 – 280 and tells the story of a great King and his people who have been displaced from their homeland and long to win it back. The King is wild and ambitious, but his motives and methods are mysterious. His great general is a visionary who fervently desires to win the ultimate battle but needs to lay his plans in secret. The women of the palace struggle to find redemption in a world in which they have no place. And then there is a commoner, the “everyman” around whom the inexorable forces of history swirl, always ready to swallow him up.

Unlike Zhang Yimou’s previous film, the ponytail-sporting Matt Damon starrer The Great Wall, the film will be told entirely in Zhang’s native Mandarin.

Shadow is filmed in a unique “Chinese watercolor” style and is both Zhang Yimou’s return to his roots as a filmmaker and a bold new beginning. The clip ends with Yimou playing off of yin-yang imagery, with the split-screens, and the final shot showing both characters on black and white circles. Even the poster displays this minimal color/highly yin-yang composition.

Village Roadshow Pictures Asia offered Asian film fans a sneak peek of Zhang’s much anticipated next project, Shadow, at the Shanghai International Film Festival, from there the film is likely to hit the festival circuits sometime in the fall.

There’s no official release date for the film yet.