When you first see Brad Bird talking up a storm one is quick to realize just how much passion and enthusiasm for filmmaking and storytelling is in this guy. Hearing his advice for aspiring animators and filmmakers was just the tip of the iceberg as he discussed his most recent film, Incredibles 2, and a little bit of insight into the project and its accompanying short film, Bao.

Bird started off by discussing The Simpsons, revealing (to this writer’s surprise) that he was the person who ultimately designed Sideshow Bob as we know him today. They showed a clip from the first season episode “Krusty Gets Busted” in which Krusty is convicted of armed robbery of the Kwik-E-Mart and Bart and Lisa investigate the incident and discover that Krusty’s sidekick, Sideshow Bob, was the culprit. The episode was directed by Bird, who revealed working on that show for eight years was some of the most fun he’s ever had.

He moved on to discuss The Iron Giant, and how he was locked into doing something for Warner Bros. because of a contract delay. The movie’s troubled release has since been eclipsed by its near-universal praise, something that Bird is both grateful for and looks back on at Warner Bros. with a twinkle in his eye. 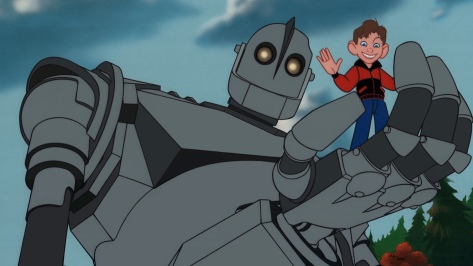 Later in the evening, the director mentioned something very interesting. Bird has never received final cut on his movies, but he finds that he himself wouldn’t have changed a thing. Even when a production like The Iron Giant, or Tomorrowland, can’t get off the ground, Bird hasn’t been pushed out of the fray or forced to leave his name on anything he isn’t proud of. “I had about the biggest, longest wish list anyone could have, and 99 percent of what I wanted to get on the screen we got on the screen within our schedule and within our budget and within our resources,” he mentioned at the end of the evening. This is true for any and all his movies.

During the second half of the evening, the subject turned to The Incredibles and Ratatouille. When pressed by moderator Cameron Bailey about how he captures the minute details with his animated characters, Bird responded: “animation is about creating the illusion of life.” The Parr family must represent any real family because otherwise the illusion is broken and that dynamic of action serving the narrative becomes opaque, impenetrable because there isn’t any relatability. The same can be said for Ratatouille. These rats had to feel like any friend you might have. This is also where Bird shared an anecdote where he had to go before Steve Jobs to discuss the title of the film. Expecting the hard, laser-eyed tyrannical genius figure we know now, Bird went in huffing and puffing, pissed off and ready to argue to which Jobs simply said: “Okay, we can call it Ratatouille.” Bird almost felt let down that he didn’t get more pushback from the Apple icon.

After covering his foray into live-action films (Mission: Impossible – Ghost Protocol and Tomorrowland), and how much their rhythm and structure feel just as attuned to his animated work, the evening ended on what, to date, is Bird’s most recent film, Incredibles 2.

For the inception of this idea, Bird began by simply asking himself questions about this universe in which Supers are outlawed because they’re being sued too much. He would ask “Is Bob Parr married” and then answer “Yes.” “How many kids does he have” and would throw a curveball at him and say “three (not unlike The Simpsons).” From there he would build the world up by simply answering his own questions about it, sometimes amused with himself as to where it would take him.

Bird was also asked by a member of the audience what new advancements they made between this movie and the original, to which Bird surmised that technology has advanced so much in the last 30 years that now the developments made in animations are probably too minute to be noticed by anyone outside of programming or within the industry. He did reveal that for Incredibles 2 they developed a system that would allow them to see a rough cut of any given shot or scene with lighting present. He compared it to the quality of a 16mm film stock; grainy but the details are there. So what would have taken days to see rendered could now be judged, modified and corrected much quicker.

By the end, Bird urged anyone listening that now is a better time than ever to pursue your art. “You have a pretty good camera that shoots HD with stereo sound right in your pocket.” That was a nice segway when the Pixar short that would be accompanying Incredibles 2 came up. Directed by Domee Shi, who is the first female director to helm a Pixar short, it is about a cute homemade dumpling that comes to life, turning into a weird little dumpling baby that delights the empty-nesting Chinese mother who made it.

Bao premiered at the Tribeca Film Festival, and Bird had nothing but great things to say about Shi as well as her school, Sheridan College, which is located just outside of Toronto, where she grew up after moving from China. The short animated film went on to win the Oscar last year at the 91st annual Academy Awards.

The evening came to a close and Bird could not have been a more animated guest. He was thoughtful and funny in his responses, recounting just the right balance of insight and anecdotes, all while pushing the form of animation as an incredible, almost dream-like tool when it comes to storytelling.

Many of Brad Bird’s movies are available to stream on Disney+ right now.