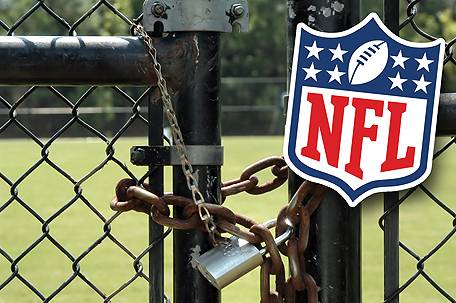 So I am watching a spring training game between my Detroit Tigers and the Atlanta Braves, and baseball is by far my favorite sport. I am enjoying watching the veterans get their mandatory 2 innings or so, and then letting all the prospects get in there for a little bit. I should be in baseball dork heaven right now. But I am not. To blame, is none other than the National Football League. Tonight at 11:59 pm barring any extensions of the agreement, which has been requested by the League for an additional week or two, the management will lockout the players, and we will be in a period with no football. Now if that meant that Shane Falco would jump in there and lead a team to Super Bowl glory, I would be perfectly happy. However this happy scenario will not be the one that pans out.

Now, personally I do not think that there will be a complete loss of a season or even missed regular season games. The federal judge’s ruling that the NFL negotiated the most recent television contracts in bad faith (which basically said that it amounted to an illegal war chest to fund a lockout). This means that the NFL will have to repay the majority of payments received from the networks in the event that games are not played.

The owners are rich, but not that rich. They need this money to cover the new stadiums and the other costs that do not go away just because there’s no football. This ruling changes the dynamics of everything we’ve heard so far, and may have inspired the above extension request.

The biggest problem is the NFL has done such a wonderful job of branding itself as a year round interest, that we’ve just gotten so used to it being a constant topic of conversation. You may think being a Lions fan would make me appreciative of a break, but the reality in Detroit is that the regular season was the side-show. It was free agent signings, trades and the draft that made football interesting. These are the things that will be thrown into flux without a successor collective bargaining agreement.

Nobody knows how this will all play out without an agreement. My gut on the whole situation is that we will see a really condensed off-season schedule once this contract gets done. The NFL has already lost in front of the Supreme Court concerning an anti-trust case. They will not want to throw their lot with the men in black robes again, which is where all this will be decided if the league does decertify (which has already been approved by the players and the NFLPA is expected to do tomorrow afternoon). We should not miss one game of the new 18 game schedule. Although this all comes with the huge disclaimer that this could turn into a giant pissing match and drag on forever, and we’ll be stuck watching the Lingerie Football League on Sundays in the fall.

UPDATE: With the one week extension a done deal, it seems like both sides are scared enough of the uncertainty that all the options other than a new agreement entail.  The loss of that pot of money scare the owners something fierce, and the NFLPA is really scared what a decertification will look like.

I think the line is moving to a deal being done before this new extension runs out.