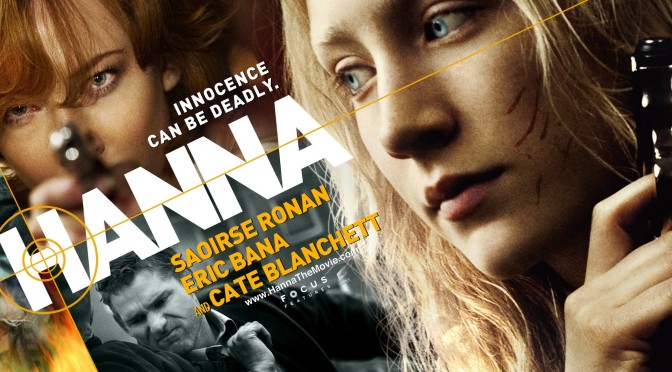 Over the weekend I had to pleasure of seeing a film called Hanna. I had been waiting for the release of this movie for quite some time now and I can tell you – I wasn’t disappointed. The movie revolves around a 16-year-old girl (Saoirse Ronan) who is trained by her Ex-CIA father (Eric Bana) from an early age to fight and survive against exceptional odds. Cate Blanchett’s character is our antagonist, as she attempts to hunt down Hanna.

The movie starts with Hanna living in the forest with her father, and shows us the incredible lengths she must go through to prove herself. It’s not immediately revealed why this training is necessary, or what they plan to do with it. Eventually though, when she has shown him she’s ready, he gives her a suitcase shaped tacking beacon. He tells her that when she is sure she’s ready, flip the switch and it will tell the government where they are.  Shortly there after, the switch is flipped and the CIA is alerted to their whereabouts.

Now for those of you who have seen the trailer, you’ll know I haven’t told you anything that you don’t already know. That’s because almost everything in the trailer is from the first 30 minutes of the movie. In what has become a pretty rare move in Hollywood, the trailer managed to look good without giving away the climax of the movie. You can see it for yourself below:

Now, as the guy who cut the trailer didn’t want to give away more than that, I’ll respect his intentions and avoiding doing so too.

What I can tell you, without giving anything away is, this movie was really good. It blends the action and mystery together nicely, and has the luxury of following a lead character, to whom extraordinary accomplishments seem easy, but we witness her struggles with simple tasks. Not a theme entirely uncommon in the film industry, but accomplished nicely here, as we’re shown the childhood she had to sacrifice to achieve the standard she now meets.

You may have also noticed in the trailer that Cate Blanchett goes to a man for help, this man is named Isaacs, and is played by British actor Tom Hollander. Hollander is probably best known to American audiences from the Pirates of Caribbean franchise.

Isaacs does the dirty work, and without giving too much away, he leaves a trail of bodies in the wake of his search for Hanna. Isaacs is my favorite character in this movie because of his ever-changing jumpsuits. It’s as if he’s wearing a mood-ring, and its changing colors by the scene…

I thought this was the best movie I’d seen in a while. The amount of character development and the layers apparent in what is advertised as an action movie, very impressive. I give it 4 Bears.