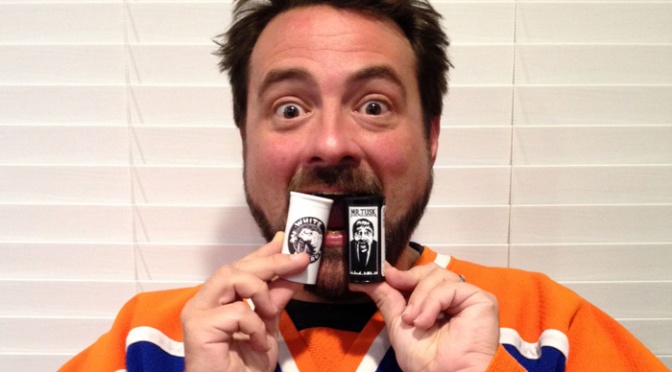 Last year Kevin Smith announced his retirement from writing and directing movies following the completion of Clerks III, bringing his career full circle. However, this no longer seems to be the case with Smith recently announcing via his Facebook page that Tusk, a film based on a Gumtree listing. Tusk will go into production in September in LA through Blumhouse Productions, with the intention of having it ready for Sundance 2014.

So what is Tusk?

On the 25th of June 2013, Kevin Smith and Scott Mosier sat down to record episode 259 of their weekly podcast, SModcast, titled ‘The Walrus and the Carpenter’. During the episode Smith highlighted an article he had read regarding a listing on Gumtree from Brighton, UK. A landlord was offering one lucky applicant the opportunity to board with him free of charge with only one small caveat. While living in Alaska the man had befriended a walrus called Gregory and created a “realistic walrus costume” which should fit “people of average proportions”. The tenant would be required to dress in full Walrus get up and act like a Walrus for an hour a day.

The listing seemed to strike a cord with both Kevin and Scott, as for the next hour they indulged in an entertaining flight of fancy revolving around how that premise could make for a truly disturbing ‘Human Centipede’ style movie. By the end of the Podcast Smith and Mosier had named said hypothetical film ‘The Walrus and the Carpenter’. Smith also posed that the film could easily be made by a company such as Blumhouse Productions, the studio that brought us the Paranormal Activity series and more recently The Purge, for $3 million.

Now this is where most of us would stick a pin in it. Not Kevin Smith though. Smith asked his millions of followers to post #WalrusYes or #WalrusNo to get their thoughts on whether people would be interested in seeing the as then fictional film. The answer was a resounding #WalrusYes.

With that in mind, and Clerks III having hit a Harvey Weinstein shaped brick wall, Smith decided to stretch his writing muscles. By the 16th of July Smith had completed the first draft of ‘The Walrus and the Carpenter’, which was now renamed  the much creepier Tusk. Smith recently posted on his Facebook page:

“The listing got my creative juices flowing and I began reconstructing the whole thing as an old British Hammer horror film, in which a mad scientist intends to sew some hapless lodger into counterfeit blubber, creating a chimera in an effort to answer the ultimate riddle.”

Eager to share his new script, Smith sent it to Red State star Michael Parks. Parks loved the script and came on board as the character who had evolved from that of the carpenter.

More importantly, Smith also sent the script to Jason Blum at Blumhouse Productions as he had suggested he would during the SModcast. Jason loved the script and agreed to meet with Smith and tour the studios. Within an hour of meeting with Blumhouse, they had agreed to make Tusk with a budget of $3 million. Smith posted the below pic on his Facebook page as inspiration for what will become the Walrus’ lair.

So on the 25th of July, a mere month after first discussing the concept, Kevin Smith officially announced Tusk via his Facebook page. This concept really excites me. I am a huge fan of Kevin Smith movies and I honestly thought that Red State was one of his best so far. It will be great to see him enter the horror territory again with Tusk.

What do you think of Tusk? Thoughts on Smith’s constantly changing retirement status? Sound off in the comments below!

One thought on “Kevin Smith Announces Tusk, Formerly The Walrus and the Carpenter”