As a die-hard fan of comics, I am constantly asked who my favorite character is, which I usually have to think about for a while. Any given day my answer may change, depending on my mood or what I’ve been reading, but most days the answer ends up the same; my favorite hero is Dick Grayson AKA Nightwing AKA Agent 37.

I may have started my obsession for comics with Spider-Man, and then tentatively graduated over to Superman, but once I discovered Batman, and by extension Dick Grayson, I was hooked. I became a staunch supporter of all things Robin, and as Grayson’s role changed over the years from sidekick to solo hero, I continued to follow and enjoy the ongoing adventure.

When deciding that Grayson/ Robin/ Nightwing/Agent 37 is indeed my favorite comic book character, I had to ask myself a few questions. What makes a great comic book character, and what makes him a hero? Does the character have an appropriate amount of costume changes to make multiple action figures? Could he/she beat up Batman/ not lose to Batman too bad?

The following glowing traits of Nightwing are the results of these questions, and the reasons why he is my favorite comic book character. Plus I have a deep-seated desire to stress the sheer awesome power of Batman and his Robins across the DC Universe. This will be covering a lot from the pre-New 52 era, which still mostly applies to the Batman family after the events of Flashpoint  changed up the DC timeline. 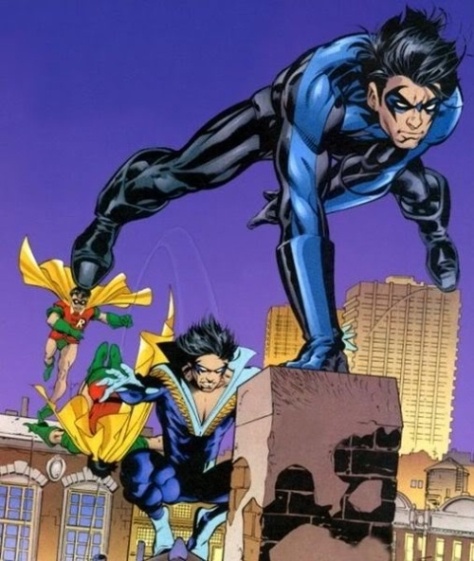 You just have to look at Dick Grayson’s first costume for proof of this. The kid was wearing green scale underoos and pixie boots for years around criminals, who were a superstitious and cowardly lot. Many fans and haters over the years have questioned this particular choice of costume, considering the length Batman goes to protect himself while Robin stands beside him as a clearly lit, unprotected target. The New 52 has obviously retconned this initial costume, but fans of Grayson know that he owned the hell out of that suit because he was just that damn good.

Batman has made a career of being a loner, and has never been one to spend unnecessary time among his peers. Grayson may have learned everything he knows from Batman, but he never lost his ability to connect with the outside world. With numerous relationships and friendships among the superhero community, Nightwing is the buddy every hero wants to have, especially if you are getting into some trouble. In a sad fact of the New 52, Dick’s best friends Wally West (Flash III) and Donna Troy (Wonder Girl I) no longer exist in their original form, leaving the hero seemingly without the friends that influenced this all important trait.

Grayson’s relationship with his mentor and father figure has more often than not been strained almost to the point of breaking, but has persevered over the years because of a deep-rooted sense of respect. As Bruce Wayne’s first ward and Batman’s first sidekick, Dick grew up affected by two very distinct lifestyles and personalities from the same man, who kept him at a distance for most of his life. Despite dealing with this hardship, the respect and love between the father and the son has been an endearing trait of both men.

Dick has always been someone to look up to, with a strong moral code and a desire to do the right thing. This has proven a valuable trait over the years as he has faithfully served the big brother archetype for the Robins that followed in his footsteps. Possibly the best big brother in comics, Nightwing has done his fair share of mentoring with each of the Robins save one (Stephanie Brown didn’t receive much brotherly love from Grayson as her career as Robin was fairly short-lived), and while Batman is clearly the father of the family, Grayson plays the cool oldest brother role perfectly.

Nightwing is a smooth talker. No doubt about it, he ranks up near Daredevil status as a premier player of the DC Universe. Of course, he does it in a way that reflects his morals and is less sleazy than some of his comrades, notably Roy Harper (Speedy/Arsenal/Red Arrow). With that being said he has an impressive list of ex’s dotting his resume that include the alien princess Starfire, Gotham vigilante Huntress (pre-new 52), the on-again off-again relationship with Barbara Gordon AKA Batgirl, and more recently his connection with the New 52 version of the Helena Bertinelli character.

Blessed with the tutelage of Batman and his own finely honed strategy skills, mixed in with his camaraderie and ability to interact with his fellow heroes has evolved into a respected skill for leadership. As one of the founders and leaders of the Teen Titans, he honed his skills as both Robin and Nightwing, growing with the team into the leader of the Titans and the eventual leader of the Outsiders. He has led the Justice League on two occasions, as both Nightwing and Batman. Much of what defined his life over the years has stemmed from his role as a leader of heroes. In the New 52, he remains unattached to any group and free of the burden of leadership, despite unofficially serving as ‘second-in-command’ of the Bat family. Even his current role as spy Agent 37 has him following orders again, but we can expect a return to a leadership role sooner rather than later.

We again have to move outside the New 52 here, as their current 5 year timeline doesn’t account very well for all the Robins, especially the historic career of Dick Grayson. He first donned the tights between the ages of 9 and 13, and lived the life into presumably his early/late 20’s, although comics aren’t known to be specific on age due to an expanding timeline that spans decades for us and years in the comic. The first of the sidekicks, he has been operating as a costumed crime-fighter longer than almost any character in the DC Universe, and has been a fixture of comics since the dawn of the superhero age. He has been involved in a large way in almost every DC event, and his seniority is recognized by his peers.

Dick is a man who can be relied on without question. As his relationships with the rest of the DCU continued to grow, so too did his reputation, even among the bigwigs like Superman. Dick Grayson rode along with Batman as Bat and Supes developed a friendship, and has earned his spot as a trusted friend of Big Blue. An assemblage of heroes wouldn’t think twice about following an order from Nightwing, especially when both Superman and Batman would be the first to get behind it. As this is pre-New 52, it’s hard to determine how much of that reputation follows him across this shortened DC timeline, but I would imagine he still stands tall as one of the most trusted heroes of the DC Universe. His recent ‘death’ during the Forever Evil storyline and his fellow heroes reactions just further displayed how much the DC Universe respects and depends on Grayson.

As the only fill in to successfully wear the mantle of the bat, Dick Grayson grew into his mentor’s cape and accepted the role he had been following (and trying to escape) for the better part of his life. Not only did he accept the mantle as well as the burden of being Batman, he did it in a way that didn’t change who he was as a person. This new life as Batman really showed the differences between Dick and Bruce, from fighting style to personality. Taking Bruce’s son Damian under his wing as the new Robin was the feather in the cap that really sold the idea that Dick Grayson had legitimately grown into the role. The stories involving Dick and Damian as Batman and Robin were some of the best, and one of the few reasons I accepted Damian as the new Robin. Dick’s acceptance of the cape and cowl and his new role as Batman was a momentous moment in the life of Grayson, and proved just how worthy he was to fill the shoes of Gotham’s protector.

Something I have always loved about Dick Grayson is the growth his character has taken over the years, which is due to his ability to adapt to change. His beginnings as a victim evolved into a defender of the same, he has grown from sidekick to successor, and adapted to every situation that came along accordingly. He effectively took over a new city away from Batman and prospered there, until it was destroyed completely during Infinite Crisis, of course. Every event of Nightwing’s storied career has improved him and made him a better person, crime-fighter, and a lasting character that I have enjoyed reading my entire life. When he made the biggest change of his life and took over as Batman, the next step was a time of hardship and loss, but he embraced the change and excelled in his new role. Even after his ‘death’ in Forever Evil, Grayson jumped headfirst into his new role as Agent 37 in the pages of Grayson, easily adapting to one of the biggest changes in his long and experienced career.

So now you are realizing that this week’s look at Dick Grayson was mainly a reason for me to gush about my love for the character. Which I feel little to no shame for, because Dick Grayson AKA Nightwing AKA Agent 37 is my favorite hero.