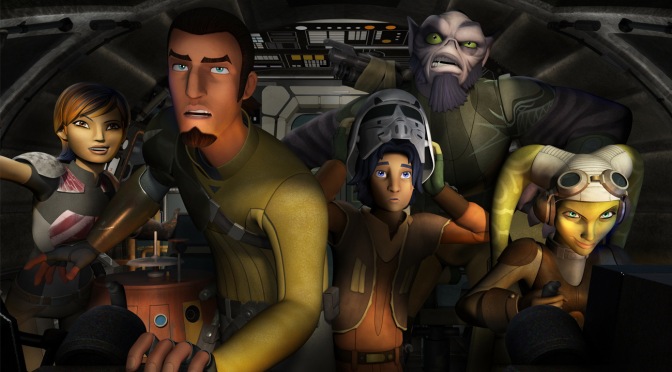 When Disney bought out Lucasfilms and talks started about sequels and an animated series, fans were understandably nervous. What would the massive multi-media conglomerate do with our beloved characters, characters that shaped our own character? Star Wars: Rebels is easing some of those concerns.

When it comes to the next installment of the epic adventures of the Jedi and Sith, the verdict is still out. And not until that familiar text crawl appears on screens worldwide December 16, 2015 will we really know if Disney is handling things correctly, but Rebels creators hope their show will give fans what they are looking for.

The show introduces us to a renegade Jedi and his crew of rabble-rousers, bent on fighting the ever-present and super oppressive Imperial forces. Kanan Jarrus, voiced by Freddie Prinze Jr., is the captain of the Ghost. A former Jedi padwan who somehow escaped Order 66, he leads a rag tag crew including Sabine Wren, a Mandalorian warrior (Tiya Sircar), Twi’Lek pilot Hera Syndulla (Vanessa Marshall), and Zeb (Steve Blum), the crews muscle. Zeb’s appearance is based on concept art for the Wookies of the original series.

The show is sprinkled with inside humor and recognizable elements long time fans will love. Our beloved Droids R2 and C3PO even enter the fray when the crew boards a shuttle that bears a striking resemblance to the Disney ride Star Tours, and whose pilot, while not RX-24 voiced by Paul Reubens as on the ride, is at least the same type of droid park goers know and miss.

Our group of heroes find themselves on a rescue mission while they are meant to be delivering stolen weapons, which they discover are actually illegal disruptors, further exposing the empire for the evil force that it is. Instead of selling the weapons, they rescue a platoon of Wookies and the crew’s newest member, a 14-year-old con artist named Ezra (Taylor Gray), demonstrates some instinctive Jedi skill to rescue a young Wookie.

The show captures many of the elements fans love. The crew may contain Jedi, but they are rebles to the core, with a nice solid dash of scruffy smuggler. Obi-wan Kenobi makes a brief appearance as a hologram. Bail Organa also has a cameo. The series is set just five years before Star Wars: A New Hope, so the potential for seeing a bit of young Leia, who would be about Ezra’s age, is strong, while we likely will not see Luke at all. Unlike The Clone Wars, there are definite sides. Gone are the friendly faces of the Clone troopers on the right side of the war, replaced by the storm troopers we love to hate, who still can’t seem to hit a target. The iron fist of the empire has come down hard on the galaxy, and the seeds of rebellion are beginning to grow. There is real potential for Disney to remind us why we fell in love with the rebels all those years ago, and help wash the taste of the prequels out of our mouths.

While the premiere keeps the big bad guys just off-screen, with Jason Isaacs’ Inquisitor hardly appearing, those who are waiting for the network premiere October 26 on ABC will get an extra treat. James Earl Jones returns to reprise his epic role as Darth Vader himself.

While the show is still only just begun, it does seem that the Disney crew (made up of much of the Clone Wars team) know what fans are looking for, while bringing in a younger audience in preparation for the coming theatrical sequels and prequels.  Younger viewers will see the empire as their parents might have, and by the time December 2015 gets here Star Wars Episode VII will open to an audience of little rebels.

What do you think of the new animated canon? Let us know what you think on Grizzly Bomb’s Facebook page.