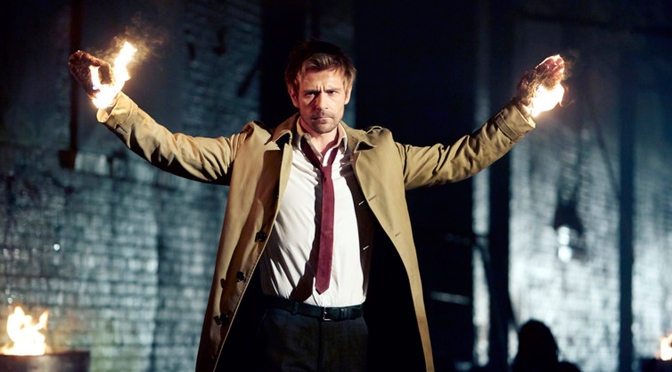 Lately, comic book fans have enjoyed a gamut of TV shows based on their favorite graphic novel personalities. Marvel’s Agents of S.H.I.E.L.D. and Agent Carter have delved into the espionage section of their massive universe. As for DC, they have opted to feature their fastest superhero The Flash in his own series, and a prequel to Batman’s reign, Gotham. Fans have taken quite quickly to those shows, while a much smaller crowd has developed a connection to NBC’s smug magic wielder Constantine.

The first season of the show has just reached its 13-episode conclusion on NBC, and a follow-up season is still in doubt. This has led fans to Twitter, trying to keep the show alive with its own hashtag movement – #SaveConstantine. Rumors has been circulating that NBC may consider moving Constantine to the SyFy cable network, and re-naming the show Hellblazer.

It’s known that the show hasn’t been garnering the type of blockbuster ratings NBC is used to for such a special effects heavy show. Showrunner Daniel Cerone made sure to speak up when fans cried afoul on social media over the fact that their new favorite show may get cancelled. Cerone did note that Constantine might be technically cancelled at the moment, but there may be a sliver of hope for the show’s future:

NBC made some early pickups but Constantine not canceled. We’ll pitch them our plans for 2nd season in May. Then they decide. Anyone putting money in studio coffers by purchasing Constantine in any form will motivate studio to find a home for show. The more international viewers the better. Foreign sales can drive a series. Keep it on air. Look at Hannibal for proof.

Fans may want to stream the show as much as possible and make their voices heard even more if they’d like Constantine to stay on NBC. Honestly though, we’d be perfectly fine with the show’s move on over to cable TV. We’re of the opinion that the show may get the proper, darker tone we loved to follow in the comics if it made its home at Syfy. Looks like we’ll have to wait till May to learn the fate of our favorite chain-smoking magician.