In what could end up being really big news or no news at all, a recent tweet from Marvel Co-President Louis D’Esposito has revealed that Tom Holland is on the set of Doctor Strange, along with director Scott Derrickson.

Holland – who is of course donning the webs as the MCU’s Spider-Man – hasn’t been mentioned or rumored to be involved in Doctor Strange starring Benedict Cumberbatch, but now that the wall-crawler is making his presence in the Marvel Cinematic Universe known it wouldn’t be too surprising to see him turn up here and there across the next phase of the MCU. 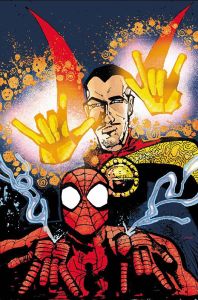 Do you think Spidey will be making an appearance in Doctor Strange? Would you like to see Holland in more MCU films or just focus on making his own film first? Let us know in the comments section below or join the discussion on the Grizzlybomb Facebook Page!