Collectible; an item valued and sought by collectors.

Collecting can be an exhausting experience. Sure it is pretty awesome when you can snag a hot new release, but it hard to track them all, and inevitably, some slip through the cracks. That’s where Homemade Horror comes in. We try to gather some of the coolest releases of horror collectibles currently online, and show them to you in one tidy bundle.

Truth be told I may have broken my own rules this month by including some slightly more mainstream releases, but they were so good it seemed horrific not to include them in the article. Now let’s see what the internet has to offer us.

First off, there has been an influx recently of modified action figures. These bootleg styled figures, 2 pieces in particular (from The Nerdist and Blumhouse), really peaked my interest.

First we have everyone’s favorite Droog Alex DeLarge from A Clockwork Orange. This figure is 1/6 scale, has a ton of accessories (including changeable hands, cane, mask and the ever important milk), and is 100 percent unofficial. The figure is created by Craftone and has some superb attention to detail in the sculpt itself. It is ready for pre-order now at about $135. Below are a few shots of the figure.

Though these are not horror based, I’ve also included some of Craftone’s other creations. Crocodile Dundee, Tyler Durden, and Taken‘s Bryan Mills. All rather impressive.

Elsewhere on the web, iHorror had some interesting news about a not so fearless vampire-killer action figure. Though clearly named as Vampire Hunter Figure, it is obvious that this is a quirky figure of Peter Vincent (played by Roddy McDowall) from the movie Fright Night. This would probably look great on the shelf of any collector of the Retro ReAction figures it’s modeled after. This figure will be roughly $15 give or take and available soon.

Dead Mouse Productions LTD and Cult Screenings UK LTD, the makers of this figure also have a documentary coming out in conjunction with their release. It tells details the creation of the modern classic vampire flick Fright Night. 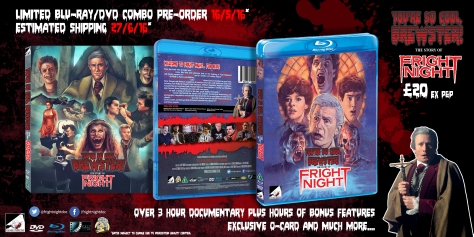 In fact they have quite a few awesome looking documentaries, all focusing on the cult movies many of us will grew up on. Most of the covers are done by art legend Graham Humphreys, who designed the VHS release covers of The Evil Dead. 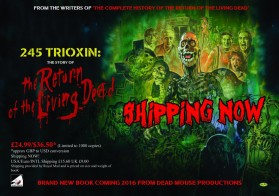 Staying with movies still, we have the custom work of Source Code VHS. This is an artist who works in a pretty much-untapped field, he modifies VCRs to make them look like your favorite movie. Pretty much any genre is fair game, and if you look below you can see that he has tackled quite a few movies already. 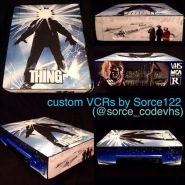 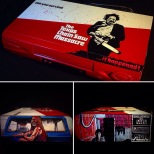 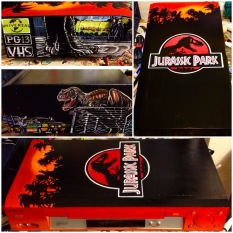 These all look amazing and if you have a bland VCR still at home that needs some TLC, then you know who to contact. You can reach Source code VHS through the Facebook link provided above. If you want a VCR sprucing up then send him your thoughts, he does all custom stuff and who knows, the next VCR on his Facebook page could be yours. Support modern artists, get something unique!

Gods and Monsters have been at it again. Not only do they do phone cases and jigsaw puzzles, they are most famously known (certainly to me anyway) for their amazing Top Trump inspired horror cards. 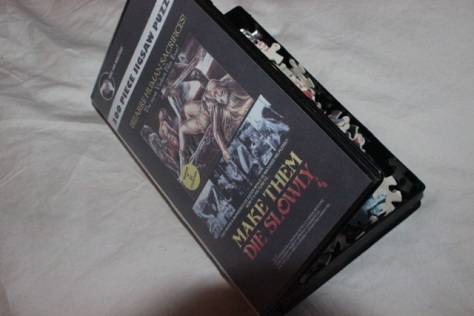 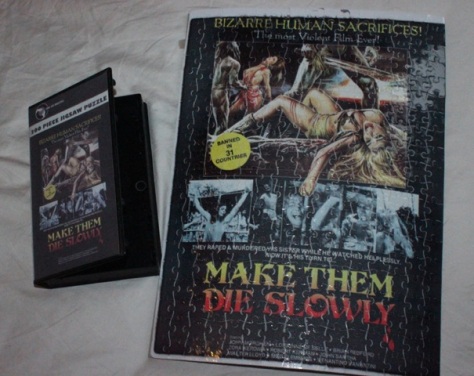 The brand new set is out now for pre-order and is called Mondo VHS.

This new game called is Last Friday, and takes things one step further. It perfectly encapsulated the Friday the 13th movies, and some elements of the slasher genre too, all in one neat box to take back home with you.

Wondering what it is all about? Here is the synopsis.

Five friends were contacted by the counselors at Camp Apache, a summer camp nestled deep in the woods. In exchange for a wee…kend getaway at the camp, the friends agreed to make some repairs and get the place ready for the coming season. What they don’t know, is that they are about to experience the most terrifying weekend of their lives. Locals believe the camp is cursed due to unexplainable misfortunes over the years.
Campfire legend tells of a murderer who died at Camp Apache and is determined to seek revenge from the grave. Several days before their arrival, a decomposed body was fished out of the lake by some divers. The authorities weren’t able to identify the body and had the corpse buried in the cemetery several miles from the infamous camp.
Some believe the body from the lake belongs to the legendary murderer who refuses to stay dead. The unprepared group will soon discover the horrifying truth. Is the body resting peacefully in the cemetery or has the maniac returned to carry out his brutal revenge?

This is a brief description of the game play which seems just as intriguing as the images for the game.

Designed by Antonio Ferrara and Sebastiano Fiorillo (authors of the horror-themed card game “Stay Away!”), Last Friday is a game for two to six players, divided into four chapters full of horror and suspense (Arrival at the Camp, The Chase, The Massacre and The Final Chapter). Each chapter plays out very differently, as the hunter becomes the prey, then comes back from the dead looking for revenge.

Hopefully this game will be released in August and then we will get a better idea of price and gameplay, but just looking at it here it looks like just the right game for a couple of horror board game fans to get their teeth into. Escape Studios (who are releasing the game) have a ton of other horror games out to, so their site is worth the look.

Finally, we leave you with another VHS related collectible and this one is a cracker. Tim Goodyear has taken his love of movies and turned them into a fanzine. Called Video Tonfa and produced in black and white on colored paper, Tim has drawn the VHS cover of the movies he has watched and then released them as a compilation book. 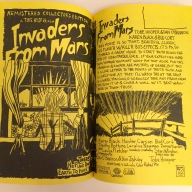 Why you may ask? Well why not!?! It has a rough and ready quality that reminds me of the fanzines from the 1980s, and it looks like loads of fun. If you want to pick a copy up for yourselves and enjoy a good, old-fashioned fanzine then you can for $25.00.

So that’s another end of another roundup of horror. Back articles of Homemade Horror are always available for reading or if you prefer reading about more comic based collectibles then you can read about a wide variety of your favorite characters through us to. Tabletop Bonanza covers some of the best board games on the market and you can always get your analog fill by opening up the VHS Vault for some video related antics.