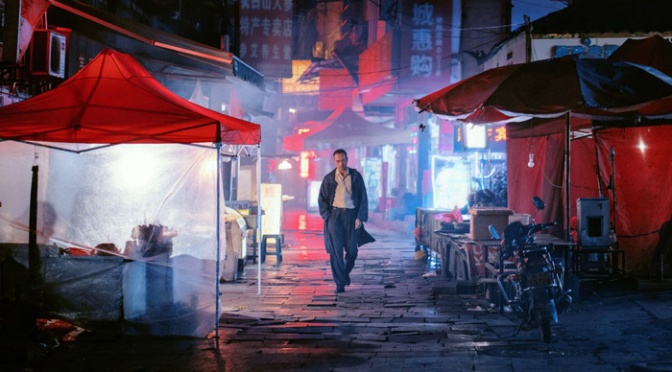 Kino Lorber has debuted an official US trailer for Bi Gan’s Long Day’s Journey Into Night. The story is about a man who goes back to Guizhou, to track down a mysterious woman and recalls the summer he spent with her 20 years ago. Earning rave reviews due in part the film’s climax: A one-hour, uncut take in full 3D.

In Long Day’s Journey into Night, Luo Hongwu (Huang Jue) returns to his hometown for his father’s funeral and finds himself encountering the ghosts from his past. Key among them is the memory of a lost love, Wan Quiwen (Tang Wei). The trail leads him everywhere from a restaurant formerly owned by an old friend to a women’s prison, and always in pursuit of the color green, be it in Wan’s clothing, or in objects, she’d once stolen away.

Check out the official US trailer for Long Day’s Journey Into Night below:

Screening in the Un Certain Regard section at the 2018 Cannes Film Festival before going on to a host of other prestigious film festivals around the world, Bi Gan’s latest film oozes with atmosphere as its neon glows conjure feelings of noir and post-modern thrillers. The film’s influences are marked with everything from literature to paintings. Director Bi sites the likes of the novels of Roberto Bolaño and Patrick Modiano and paintings by Marc Chagall. Additionally, another filmmakers’ work such as the cinema of Wong Kar-wai, Hou Hsiao-hsien, Tsai Ming-liang, David Lynch, and Andrei Tarkovsky. Dream-like and breathtaking, Long Day’s Journey Into Night has become one of China’s biggest Art House hits to date.

This is truly one of the best and most beguiling films of the year, filled with exquisite visuals and a bisected structure which finds its first half being recast and recapitulated into a trance-inducing, 59 minute-long single take in jaw-dropping 3D. The film also stars Taiwanese cinema legend Sylvia Chang and bears no actual relation to Eugene O’Neill’s revered play of the same name.

Check out a variety of posters for the film from around the world below:

Long Day’s Journey Into Night will open in New York City and Seattle on April 12 and later expand to Los Angeles and other major cities after that. All theatrical showings will be in 3D.