It was also revealed that Brent Spiner, Jonathan Frakes, Marina Sirtis, and Jeri Ryan would be reprising their roles!

The man himself, Patrick Stewart, unveiled the first official trailer for the new series to a packed Hall H at San Diego Comic-Con. Stewart returns with CBS All Access’ Star Trek: Picard 17 years after last appearing in 2002’s Star Trek: Nemesis. Little is still known about the plot aside from the fact that Picard had left Starfleet at the rank of admiral for unknown reasons

Let’s check out the first trailer for Star Trek: Picard below:

During that same panel, it was also revealed that Brent Spiner, Jonathan Frakes, Marina Sirtis, and Jeri Ryan would be reprising their roles from Next Generation and, in Ryan’s case, Voyager. Jonathan Del Arco will also appear, likely reprising his role as the Borg Hugh from TNG considering Stewart and co. confirmed the Borg would be present in the new series. They now join previously announced cast members include Alison Pill, Michelle Hurd, Evan Evagora, Isa Briones, Santiago Cabrera, and Harry Treadaway.

When asked why this was the project that made him return to trek after such a long absence, Stewart said that after years of saying “no, thank you but no,” he said “as the subject matter of this new proposed series became clearer and clearer, and as I began to meet our incredibly distinguished writing team… I knew that something incredible was going to happen and I wanted to be a part of it.” We’re glad to see him back!

Executive Producer of Picard, Alex Kurtzman, said it’s very different in tone from CBS All Access’ other Star Trek series, Discovery. He said Stewart pushed them to think outside the box. “And (to think) about what was important about the box that everybody loves so much, so we asked a lot of questions about what Trek meant to each of us.” 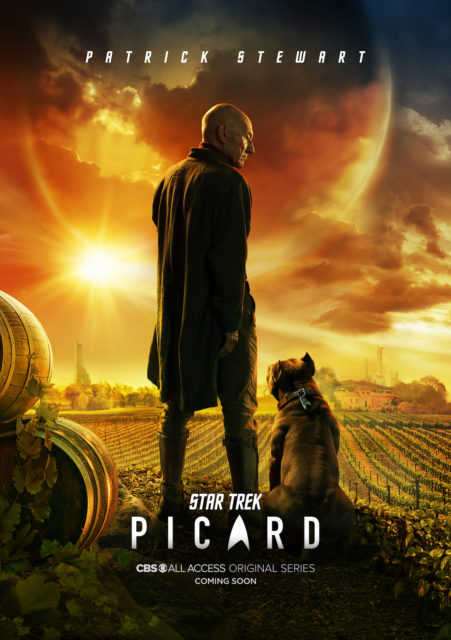 The series hails from CBS TV Studios in association with Secret Hideout and Roddenberry Entertainment. There is still no confirmed premiere date at this time for Star Trek: Picard.

One thought on “[SDCC 2019] Star Trek: Picard Trailer – Patrick Stewart Is Back In The Captain’s Chair!”