The film, again, follows Borat Sagdiyev who returns to America after quite some time. Directed by Jason Woliner, the sequel plays with the idea that Borat is now recognizable and even with him putting on various disguises his popularity has also still not reached some parts of the country. We see full-on Borat quarantining with some those who would most likely still not recognize the comedian’s most famous creation as he hangs with some less-than-liberal folks.

Check out the trailer for Borat 2 (we can’t keep typing out that whole title) below:

Sacha Baron Cohen shot the sequel in secret over the summer. News broke that Cohen had crashed a far-right rally in Olympia, Washington, and convinced the crowd to sing a racist song with him, which all but confirmed rumors of the film’s production. Cohen was dressed in overalls and a fake beard and sang about injecting children with the “Wuhan Flu.” The even was for a far-right militia group known for their gun advocacy called the Washington Three Percenters. Another of Cohen’s pranks leaked after New York Mayor Rudy Giuliani revealed in July that Cohen ambushed his interview at the Mark Hotel in New York City.

The trailer itself shows some cring-worthy moments like Cohen appearing as Borat at a conservative convention dressed as Trump with an actress playing his daughter slung over his shoulder.In addition to far-right groups and Giuliani, Cohen is also expected to take aim at Mike Pence, Donald Trump, and Jeffrey Epstein in Borat 2.

The original Borat was a box office success, grossing over $260 million worldwide. Cohen won the Golden Globe for Best Actor in a Motion Picture Comedy or Musical, and the film went on to land an Oscar nomination for Best Adapted Screenplay at the 79th Academy Awards. The film is often referred to as one of the best comedy films of the 21st century. The screenplay for Borat 2 is credited to Sacha Baron Cohen & Anthony Hines & Dan Swimer & Peter Baynham & Erica Rivinoja & Dan Mazer & Jena Friedman & Lee Kern.

Check out the very, err, revealing poster for Borat 2 below as well: 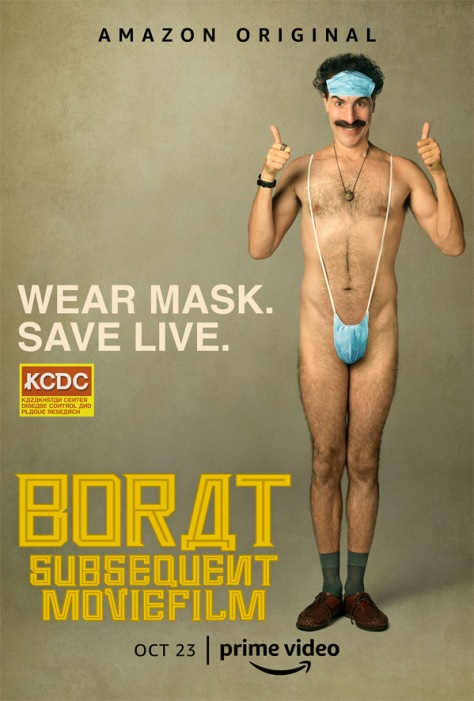 Borat Subsequent Moviefilm: Delivery of Prodigious Bribe to American Regime for Make Benefit Once Glorious Nation of Kazakhstan will be released on October 23 on Amazon Prime. Plenty of time before the election, which is just *Chef’s Kiss.*