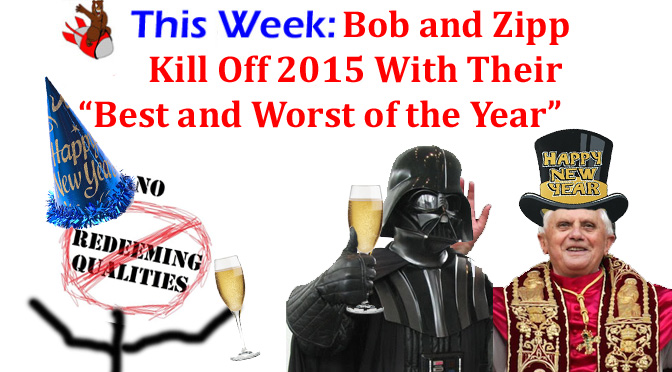 Grizzly Bomb is proud to continue our partnership with the  No Redeeming Qualities Podcast! So now Bob and Zipp are in their pre-New Year’s Eve mode and talking about the college football playoffs (Go Spartans!), the best and worst moments of 2015, and how many feet of meat Bob can choke down his gullet.

END_OF_DOCUMENT_TOKEN_TO_BE_REPLACED

Ok so sorry about missing last weeks episode recap and review, but I got super tied up at work…. and I’m lazy. In all honesty Sanctuary Part 2 was, at best, 2 out of 5 grizzlies. In short, the 2nd Mass gets their kids back from Clayton, Clayton dies, Pope has a heart, and the previously harnessed kid, Rik, thinks of himself as an alien now. That’s it… One sentence. BOOM. Efficiency.

END_OF_DOCUMENT_TOKEN_TO_BE_REPLACED

We open up this weeks episode with the good doctor getting rolled for medical supplies by a family wishing to leave the protection of the 2nd Mass. They fear things are not safe after the death of Dr. Coward and the arrival of the harnessed kids last week. What a bunch of ungrateful bitches. Needless to say, they are able to leave, but a soldier stops them and confiscates the stolen medicine. Who was this mystery man you ask??? Well he turns out to be the Lieutenant Clayton, one of the few survivors of the 7th Mass, and he comes bearing bad news. Not only was a majority of the 7th Mass killed and their children taken, but a skidder attack is soon approaching. Don don dooooooon.

END_OF_DOCUMENT_TOKEN_TO_BE_REPLACED

Let me start this out by first saying Congratulations. Congrats to the show for proving me wrong and earning a 10 episode second season, which is slated to air summer of 2012, and was ordered only 3 episodes in to the first season. The show has managed to retain 3.8 million of the 5.9 million premiere viewers. Way to go Falling Skies, way to say “IN YOUR FACE” to an opinionated idiot that writes for a certain website.  Anyways on to tonight’s episode…

So for anyone who looooooooooves character development, this episode was for you. While the episode is centered around the rescue of Tom’s son Ben, we delve a little bit deeper into what makes Anne, Margaret, and a little bit of Captain Weaver tick. The episode kicks off with Tom and Hal once again coming up with a plan to rescue their missing family member Ben, and getting the ok from Captain Weaver. In short, the plan is to sneak in the hospital at night while the guarding skidder is sleeping, kill him without making a noise, and avoid alerting the patrolling mech. Hence the title SILENT KILL!

After the plan is decided, we cut to the good teacher and Tom’s younger son Matt playing with radios and listening to a classic record. Captain Weaver picks up in the music while staring at a drawing from a child and calmly walks into the classroom, confiscates the record, and informs the good teacher that he can play record he wants, except that one. It appears the stoic Captain has a soft side after all. More on this later. Next, we have the best of the entire episode. The death of Dr. Harris!! While playing a little too close to the skidder cage and to study new noises the alien is making, the skidder manages to choke the life out of the cowardly doctor. Kudos to the writers for killing him off so quickly.

After Dr. Harris’s death, we then see Hal talking to the previously rescued boy about his time being harnessed with the aliens. From what he learns, Hal decides to change the original rescue plan and where a harness to disguise himself to save Ben. A plan not quickly approved by his father. Quick side note, I think they should have made this conversation a bit longer and more detailed. It would have been great to get more insight into what the aliens where doing with the captured kids. Anyways, we now join Anne, Tom, and Hal where they are discussing how best to kill a skidder without making any noise. Anne informs them of a weak spot in the aliens mouth that could provide a way to kill them. After placing a saucer of water, Anne attacks and kills the captured alien by stabbing it with a scalpel inside the creatures mouth at the soft palette location they were discussing. After killing the creature, Anne storms off to the lost child board and confesses Tom how easy it was to kill the alien by picturing her family and how she has nothing to reminding her of her lost loved ones, only the blood from the alien on her hand. We now see why she has shut down when it comes to discussing her family.

Next, we finally get the what we have been building up to for the past 2 episodes, the rescue of Ben. Hal is able to successfully break in to the hospital where his brother is being held wearing a harness as a disguise. He slips in line with his brother and the other harnessed kids being led by a skidder. This is where it gets a little weird. The skidder leads them all in to a room where they all lay down in a circle, and the skidder hovers over them, caressing their heads as they all go to sleep. This looked a lot like a mother nesting over her babies, showing that there is something more to this enslavement by the alien invaders. As skidder falls asleep, Hal attacks and thrusts a pocket knife into the skidders mouth as Anne did back at the base, but during his attack the harnessed kids pull at Hal to try to stop the attack. To make things even more weird, after the skidder dies and the rescue team starts save the harness children, we see the kids placing their hands over the dead alien showing a sign of concern and sadness. What the F is going on here?

With the kids rescued and Dr. Harris dead, it’s now up to Anne to successfully remove the harnesses from all kids on her own. After removing all the harnesses, the final child (don’t worry, not Ben) died on the make shift operating table. Despite encouraging words from Tom on the number of kids she just saved, she is focused on the one that died. Someone should really explain to her she needs to be a glass is half full kind of person. A ‘Debbie Downer’ is no good for surviving alien invasion.

While waiting for Ben to recover we see a conversation between Hal and Margaret, who was instrumental in the rescue due to her extensive knowledge of the hospital, where we get to learn that Margaret is a cancer survivor who was given a 50/50 chance to live, and its that mind-set that allowed her to survive not only the invasion but her time spent with Pope’s crew.

The show comes to an end with Captain Weaver watching Tom and his reunited family, then going off to play the record he confiscated in the beginning, and Ben waking up to recognize his dad. All in all, I would say this week the show was OK at best. While I know character development is a must for any show in order to gain sympathy and create a connection between us and the characters, I feel they went about it a little half assed for Margaret and Captain Weaver. They probably should have taken a page from Lost and spend an entire episode focusing on them mindset of each character, that’s just my opinion.

I’ll be curious to see what adventure the writers have in store for us next since we have spent the first few episodes wanting to rescue Ben. Do we go back and rescue Hal’s girlfriend, or is she just to be forgotten about and Margaret will take her place?