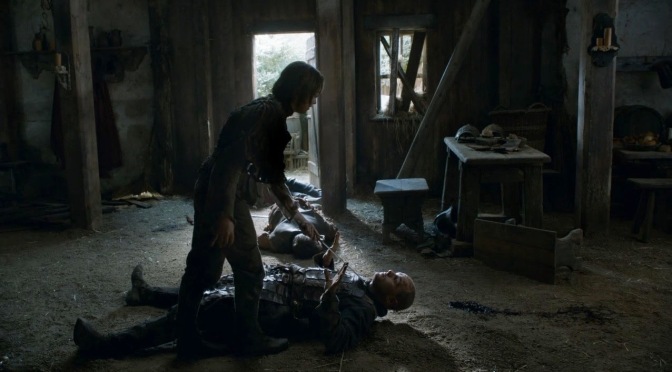 How many shows on TV can get away with a ten second mish-mash of essentially still photos and get away with calling it a teaser trailer? HBO has released the latest promo for season five of Game of Thrones, and chances are it will take you longer to load the video than to watch it.

To be fair to HBO however, there’s still a lot we can unpack from the footage and consider while we look ahead to this year’s foray into Westerosi politics.

“There is only one thing we say to death…Not today.”

The words of fan favorite sword dancer Syrio Forel play over the teaser, and if you take only one thing from the promo, it’s that Arya has taken Syrio’s training to heart. One of the most recognizable shots is Arya standing over Polliver, when he finally gets stuck with Needle’s pointy end in the first episode of season four. That shot is also framed by two others – immediately before and after Ned Stark’s beheading in season one.  What seems like the longest hanging shot however is Arya practicing the footwork taught by Syrio back at King’s Landing. In short, the trailer is a very quick summary of Arya’s revenge story so far, tracing it all the way back to Ned’s death in anticipation of what’s to come in season five. 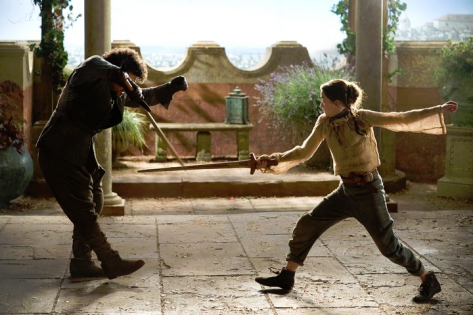 That brings us to the first and last moments (excluding the 3 eyed-raven intro) that actually do look ahead to this season: a quick establishing shot of a port town, and Arya approaching a building with a black and white door. These are the only two things shown that actually have not happened yet in the series, and while they may not hold significance to the viewer yet, they certainly are major elements of Arya’s next chapter. Remember that last we saw of her, the little Stark girl had flashed her Braavosi coin and set sail to new land. Expect that port town to be on camera quite a bit this Spring.

So in a literal sense the trailer delivers a pretty straightforward, if not extensive message to the viewer, but like all things Game of Thrones there’s enough subtext here to connect threads that may not exist, and contemplate fan theories that might be complete nonsense. But some crackpot theories are just too exciting not to entertain. In this case, it’s the possible survival of Syrio Forel. The theory goes like this: It’s unlike HBO or George R.R. Martin to kill a character of importance off-screen. We’ve seen characters ‘die’ off camera before only to return un-killed: Bran and Rickon’s death at the hands of Theon is one notable instance. When Syrio and Arya are confronted by the Kingsguard and Syrio takes on a gang of knights we never actually see Syrio take a killing blow. Instead Arya runs off at Syrio’s command and the camera follows shortly afterward. Considering how adept Syrio is with a sword, it’s not outlandish to think he may have survived the ambush and made it out of King’s Landing.

Part two of the theory is Arya’s second run-in with a mysterious Braavosi – a rogue named Jaqen H’Ghar  – who helps Arya immensely later in the second season when she’s trapped in Harrenhal. Despite being locked up alongside two thuggish, dangerous criminals, Jaqen is surprisingly courteous to Arya. You’d think a man thrown in with that company would either ignore or antagonize the girl, not assist in the killing of three men of her choice. Of course, the fact that he can so efficiently dispatch the three targets selected shows that Jaqen is an extremely adept fighter. And finally, and most importantly, we learn that Jaqen can change his face and his identity seemingly at will. The theory is that Syrio did survive at King’s Landing, and he and Jaqen H’Ghar are one and the same; two false identities of the faceless man. It’s a twist that suits Martin’s love for surprising his audience, and would explain how Braavos keeps coming up in Arya’s story arc. 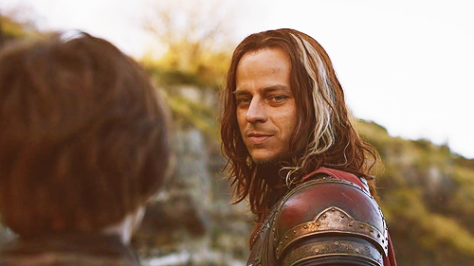 The third part of the Jaqen/Syrio theory is something that hasn’t happened yet: Their reunion. Remember, Jaqen gave Arya the Braavosi coin which granted her passage overseas. If the theory holds up, it’s evident Arya and the faceless man will meet again, and likely it’ll happen wherever the coin takes her. Because if that’s not the plan, what other purpose would the coin serve? And from a narrative sense, it’s odd for Martin to have written Jaqen H’Ghar into the story for such a brief period of time, only to have his story ended so abruptly. Naturally, these questions may be answered down the road in a number of ways we haven’t yet considered, but at this point in time, there’s just enough wiggle room for the idea to hold merit, and a lot of GoT armchair theorists are taking Syrio’s reappearance in this trailer as evidence enough that they’ve got it right.

Whichever way you interpret the trailer, there’s actually quite a bit to appreciate despite how short it is. Several complaints have been raised about its length and the fact that the trailer is almost entirely made up of footage from previous seasons, but frankly I love this. A trailer should be used to set a mood, build excitement and draw viewers. Movie trailers seem to have forgotten this, and instead they tend to operate like a highlight reel of major action sequences and funny lines. It’s a common complaint. They show too much. Here we’re able to get reacquainted with Arya’s storyline and start to mull over her place in season five without seeing her best moments. It may not be Breaking Bad‘s Ozymandias trailer (which is probably the greatest television promo ever produced) but it’s a masterful show of efficiency. I mean, hell, we’ve managed to get 1000 words out of ten seconds. I’m starting to see why the books are 1500 pages each.