People love harking on about the good old days, when things were ‘so much better,’ or if nothing else slightly more innocent than today. Now I am as guilty as anyone of this, my life mostly revolving around the entertainment of my youth, be it retro games, comics or movies. I love modern entertainment as much as the next person, but ’80s media is where I really get my freak on! And it would seem that I’m not alone in my desire to celebrate the things from my youth, as a series of creators have made their own products which all incorporate an 80s theme to them.

First, let’s take a look at a game that’s gaining popularity in the US, but has been a staple in the UK for decades; Top Trumps, an ingeniously simple concept which is addictive to play. For people unfamiliar with the concept, each player has a set of cards based on a popular item (cars, planes, shows, superheroes, etc), with each card having a series of category ratings on them.  The aim is to steal the other player’s cards by picking the highest rated category. The winner is the person with all the cards. Now the official Top Trumps franchise has covered pretty much every topic on the planet, but some creators have chosen to make their own versions. One of the more popular series came out in the late ’70s, early ’80s and focused on gory, and sometimes poorly drawn versions of favorite horror characters. 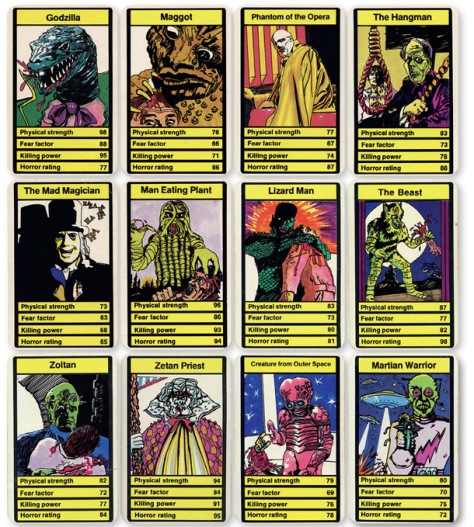 Well it would seem that Ebay user Macab2005 had these cards and they made a huge impression, because Macab has created a version using some of the horror characters of the present, all done in that retro style. With popular horror icons renamed as characters such as Horror Basket (Basket Case – Belial) and Deadly Doll (Child’s Play – Chucky) you get to see all the strengths and weaknesses of some of horror’s best and worst villains. There are currently two packs for sale on Macab’s Ebay page and they’re great fun, even if you never played with the cards they are based on. 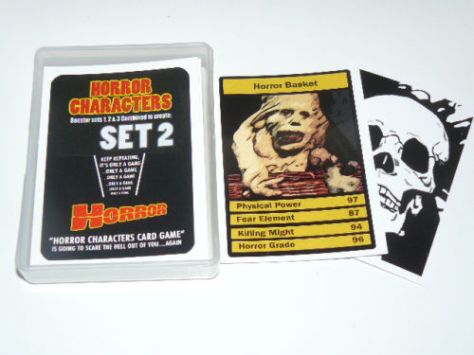 Macab’s isn’t the only horror based Top Trumps collection out there. Gods and Monsters have their own version called Lurid Trumps, and as you can imagine these are not for the faint of heart! This set focuses on the UK Video Nasties scene of the mid 1980s, where popular VHS titles were named and shamed and people went to prison for renting out movies. 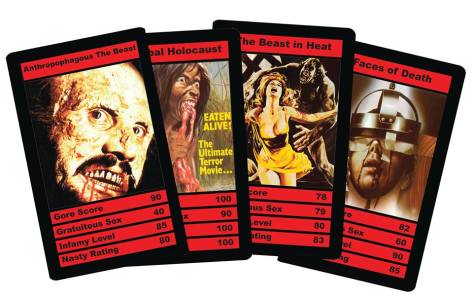 Taking the names from the titles that were notorious at the time, you can see the gore, sex and nasty ratings of films that would make your grandparents blush! Series 1 sold out almost instantaneously, but check Gods and Monsters Facebook page for updates on when series 2 will go into production. I will give you a hint, the pre-orders are already selling out fast!

Speaking of VHS the next release is from artist Tom Hodge, known in art circles as The Dude. You may have seen Tom’s artwork on DVD releases such as Wolf Cop, Hobo with a Shotgun and numerous Arrow DVD releases. What you may not know about Tom however is that he is a VHS collecting machine, with a sizeable collection in his own right.

He has amassed so many in fact that he now has a book coming out showcasing the VHS cover artwork on the movies in his collection, and much like the VHS Vault reviews here on Grizzly Bomb, he wants to share his love of VHS to the world.

Called VHS Video Cover Art, the book does what you would expect, showcases VHS artwork in all its glory. Available for pre-order at both Amazon UK (£27.00) and Amazon US ($26.87), it is a must have for VHS fans and art lovers alike. The book’s released through Scheifer Publishing and though it may be a main stream publisher the work Tom has put into this book via his years of collecting tapes makes it a perfect addition to the Homemade Horror section!

Finally we focus on two figure creators, each of a different genre, but both displaying some great detailed products. Retroband is a toy making specialist which is the brain child of Aaron Moreno. He was creating retro styled figures long before the ReAction toy line took it into the main stream. The Retroband of figure focuses on obscure and horrific horror stars from the ’80s which would never have had an action figure when they were released.

Ever wanted to have characters from Creepshow made into a plastic? Retrobrand can deliver. The versatility of the collection here is great and with commission readily taken you can have whichever figure you desire from your childhood for a price. That price seems to range from around $100 per figure and can be found via their website, though be warned they sell out extremely fast.

If anyone remembers the toy line Monsters in my Pocket, then you will know how much fun small, plastic figures could be.

Muscle Things Laboratory has brought this style of figure back to the horror genre and to the audiences again with their collection of low-budget horror characters encased in small plastic. 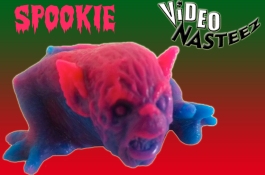 There are some extremely odd, yet genius creations here with Freddy Krueger, Chainsaw Hookers and even creatures from the low-budget movies like The Video Dead and Spookies make an appearance in their back catalog. The Freddy head looks exactly like a line of water spitting horror heads that came out with both Jason and Freddy, getting figures made of their heads that spat water out of their mouths! Much like the rest of these featured items, these collectibles sell out pretty darn fast so be sure to check their Facebook page for updates on releases.

It is here that we leave the world of horror collectibles behind, but with new and exciting products turning up all the time on the independent sellers’ market it will no doubt not be too long before  we see more releases in the Homemade Horror section sooner rather than later. Be sure to keep checking Grizzly Bomb for up to date news on all things horror and collectible based as well as all things fandom.