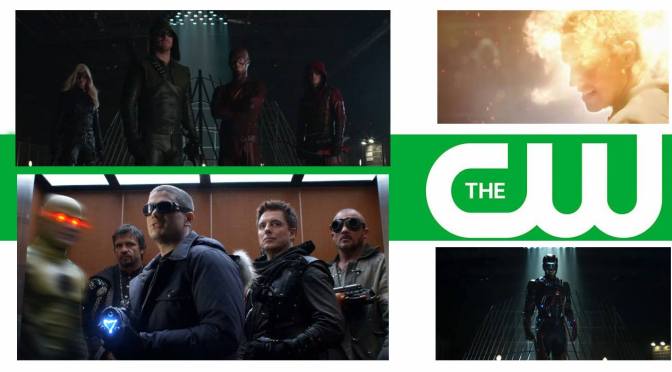 “You’re part of the club now.”

Hello! It has been quite a while since I’ve made an appearance ’round these parts. What on Earth could bring me out of semi-retirement? Well it is none other than perhaps the most fangirl worthy moment ever delivered via trailer. Featuring not only Oliver Queen’s Arrow, and not only Barry Allen’s Flash, but also their collected big bads in what they’ve deemed “Superhero Fight Club.”

Seriously, there’s a chance I squealed like a schoolgirl while watching this. That girl in the elevator? I identify with her. Very strongly.

Enough of me talking. Watch the video yourselves.

Right? I mean, there’s just so much going on. So much to take in. Not the least of which is that amazing elevator music to accompany our favorite hero’s to their destination.

For those who have read my Arrow reviews in the past, you know I’ve been complaining, loudly, wondering when on Earth Laurel Lance was finally going to become the full-fledged Black Canary. Especially in those season one episodes when they kept mentioning one thing after another that we all knew was aspects of the Black Canary. The sushi, the fishnet stockings, the martial arts… it was maddening. So I can’t tell you how satisfying it is to see her name on display! True, it just says Canary, but at this point, beggars simply cannot be choosers.

I mean, really. That board right there is just a Green Arrow fan’s dream. If they’d actually start calling him Green Arrow? Well I think we might just all die.

Of course, this was a Superhero Fight Club, so it wasn’t going to be limited to just a few “sidekicks.” Nope, Stephen Amell’s Arrow himself makes an appearance, of course fighting Ra’s al Ghul. Did we think it was going to be anyone else? Especially after all the recent talk of Manu Bennett’s Deathstroke being done in the series thanks to the cinematic universe casting their own Deathstroke.  Plus, spoiler alert: Ra’s al Ghul and Oliver are having a bit of a lover’s spat currently, so it’s seems appropriate.

Just as appropriate as Grant Gustin’s Flash squaring off against the trifecta of Captain Cold, Heat Wave, and then the kick-ass (at times quite literally) Reverse Flash. Of course, Firestorm couldn’t be left out of the mix and he arrives in grand fashion. Speaking of, having Victor Garber’s Martin Stein manning the scoreboard was a nice touch.

Just when we thought we’d seen all the Superhero Fight Club had to offer, of course, Mr. Ray Palmer as Atom comes crashing in. Will the final episodes of this season of Arrow and Flash give us more of a glimpse of what to expect in the coming spinoff from those two shows? I think it’s a safe bet.

The only thing missing from this fun fisticuffs, is of course everyone’s favorite Team Arrow and Team Flash members. I’d loved to have seen Diggle take his turn in the cage. And I’m sure Cisco would have had at least one amusing observation about the whole thing. Oh well, maybe next time.

The Flash returns on Tuesday night at 8/7c and Arrow on Wednesday night, also at 8/7c.

And, just because I’m here, and it’s been awhile…. #IWantABoosterGoldTVShow.