Both a theatrical and international trailer deliver on everything fans have been waiting for: blood, ghosts, macabre horror, thick, Gothic atmosphere and of course, Tom Hiddleston.

Check out the theatrical trailer below:

And the international trailer:

Beautiful, creepy and absolutely stunning in both production design and tone. Both of these trailers would be enough to get any rapid fan of del Toro or the classically macabre foaming at the mouth. The set design is eye-catching, and the use of color –  those reds! – is striking.

Now, it’s never a good idea to become overly excited over a trailer(s). I think we all have examples of when a movie was over-hyped by all the promotion (Pearl Harbor, AVP, The Haunting), but in the case of Crimson Peak it seems like they’re still holding back on all the good stuff. Let’s hope that after the film’s complete running time something more will come to fruition, a feeling of tonal satisfaction few other films of this size have been capable doing in some time now.

In addition to the trailers, check out the new motion poster below.

The trailers feature a quote from master of literary horror Stephen King, who gives Crimson Peak a glowing seal of approval. Back when Evil Dead and Hellraiser were coming out King was responsible for throwing both Sam Raimi and Clive Barker into the forefront of extreme horror filmmakers. Though del Toro doesn’t really need the publicity of the iconic horror writer, it’s a nice touch.

When researching director Guillermo del Toro’s overall work ethic, you can see how Crimson Peak might take shape into a supreme horror fantasy unlike anything else on the big screen. He has a unique take on everything otherworldly, one grounded in mythology, history, art, and all things monster.

“I always show you the monster, I always want things to be up front. I want to show you the faun, the kaiju, and the ghost in the Devil’s Backbone. Because the scariest things in my stories, in my opinion, are the humans,” says del Toro, and he has always taken this approach when crafting his worlds. Fascinated more with the anatomy and mythology of his creatures, he never loses sight of his human characters though. Often times making the human characters more reprehensible and monstrous than the creatures.

Take a look at the new images released today, they all focus on the principal cast of the film:

Seeing del Toro talk in person is an experience that can be equated to hearing a great teacher, one so enthused by the subjects he loves that you can’t help but become infatuated with the material yourself. His approach to the supernatural is also been unique. Take for example The Devil’s Backbone wherein the ghost of an orphaned boy stands in for an analogy of war…an artifact trapped in amber. With Crimson Peak, the director continues this ideology.

“I go very counter to the culture of ghost stories. I just want the ghosts to be, and then make it a creepy movie, rather than one based on scares. Make it an atmospheric movie, which is creepy, yes, but the more you attend to the story the more you’re hopefully invested in the human characters – good or evil – and the more the ghosts become a palpable threat.”

Can’t wait! And as an added bonus here is the brand new poster to accompany the myriad of Crimson Peak material already coming out today: 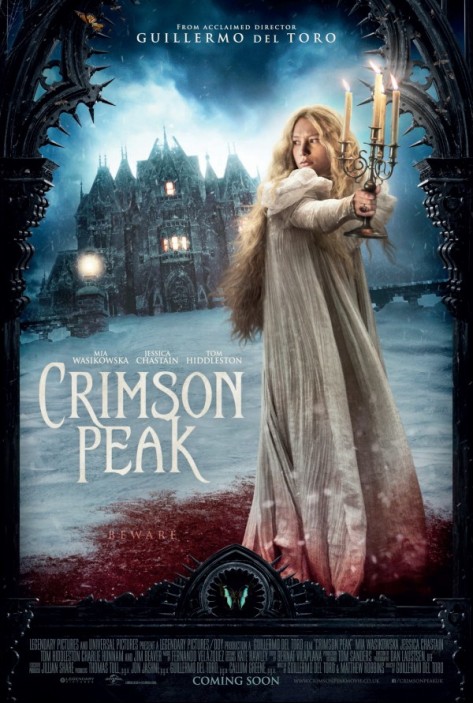 Crimson Peak is produced by Del Toro, Thomas Tull, Jon Jashni and Callum Greene with Jillian Share serving as executive producer. Look for it to hit both theaters and IMAX in 3D beginning October 16.