Action movies are great aren’t they? Sure they have their critics like any other genre, but like horror there is something raw about action movies, indulging our love of seeing people blow stuff up has never gone away. The Expendables series keeps on bringing genre stars onto the silver screen together, and legends like Steven Seagal and Jean-Claude Van Damme are still plying their trade in the low-budget market.

Fans of these movies will recognize the classics like Cobra, Under Siege, Commando, Universal Soldier and the like. But what about the more obscure affairs you could be missing out on? What about the low-budget schlock, sitting on shelves just waiting for you to find them? There is a wide variety to choose from, spanning different decades, as well as varying budgets and acting abilities. So it is with great pleasure that I get to introduce just a few of my favorites from these regular features on the insane world of low-budget action. 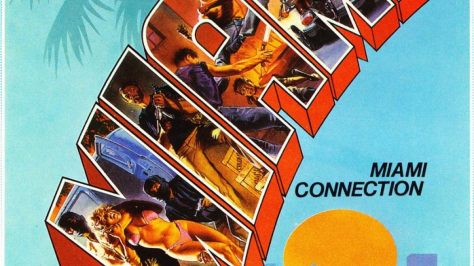 Miami Connection is a lost gem of an action movie. It came to prominence because of its expert marketing by Drafthouse Films, who re-released this gem in 2012, complete with Tom “The Dude” Hodges artwork (the talented chap behind the Hobo with a Shotgun art).

This film has pretty much everything you can possibly want out of an action movies. You have motorcycle riding ninjas stealing cocaine in the very first 5 minutes of the movie. Now tell me that dosen’t interest you. Then we get a pop rocking ’80s band called Dragon Sound, who just happen to be black belts in Taekwondo. Friction arises when ninja Jeff gets a miffed about his sister falling for one of the band members. Things escalate quickly and result in all out war with the ninjas. And it all happens in the midst of a father-son reunion. Don’t worry though the film has a happy ending.

Now if the sheer fact that there is a ninja named Jeff hasn’t got your attention, don’t worry – the rest of the film will. And their song Friends Forever is sure to become a staple on all of your future playlists. The film is all heart and totally encapsulates the 1980s. Day glow neon colors, mullet rock tunes and Kung Fu. Perfect.

Way, way before Jackie Chan and Chris Tucker came on the scene with Rush Hour we were gifted this 1989 masterpiece, which has pretty much the same plot structure. Mr Miyagi himself Pat Morita plays Investigator Fujitsuka Natsuo, who teams up with Detroit cop Detective Tony Costas, played by none other than Jay Leno. The same template from Rush Hour is kept with these characters. Costas being a womanizing, sexist and racist slob who, as you would expect plays by his own rules. Fujitsuka Natsuo plays the straight laced, by the book cop who again keeps quiet for the first part of this movie. Seems Fujitsuka is looking for a fellow country man who has fled Japan with top secret car part designs and he needs Tony’s help to get them back.

This is pretty much as you would expect, action packed ’80s action with some intentional (and non-intentional) comedy, and Costas and Fujitsuka getting drunk in a kitchen. I doubt it’s a film they bring up often when discussing their careers, but it’s certainly a film that needs watching at least once, just for the star powered teaming of Pat and Jay who go together quite well…or not really, depends on your tolerance of dodgy acting. 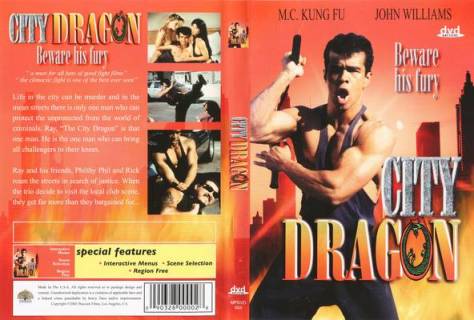 Bordering on the so bad its good territory, City Dragon mixes moderately good Kung Fu, with incredibly bad rapping, and an odd second half which goes all Saturday Night Fever on us. The lead character Ray is played by ultra-90s sounding MC Kung Fu, and spends most of his time rapping with his friends Rick (John Williams) and Phil (Philthy) Phillips, and comparing how masculine they are.  Phil also directed the movie and he was obviously so proud of it as he decided to name his character after himself. The plot flows between these guys rapping about getting or trying to get laid (seriously they even rap about prophylactics for heaven’s sake), to Ray getting laid (which also happens a lot), to Ray randomly kicking thugs in the face!

The rapping is terrible, yet somehow it manages to entrance you. The plot flows in a very unusual way, going from the antics of these likely lads, to a bizarre second half which focuses on Ray becoming a father, having to support his family in a dead end job and getting sexually harassed by his dominating boss. Suffice to say not much gets kicked in the second half. People expecting to see some non-stop action must have been surprised the first time they popped this into their entertainment systems. Still this is an incredible viewing experience, much like watching The Room for the first time; it has to be seen to be believed.

Say alert and you too can find all these movies on a variety of platforms and media.