Most Muppet fans have already heard the good news: after a lengthy hiatus, the Muppets are returning to television in a new series, aptly titled The Muppets.

The series, written by Bill Prady (The Big Bang Theory) and Bob Kushell (3rd Rock from the Sun) and directed by Randall Einhorn (Wilfred), will be shot in mockumentary style, à la The Office. The show will follow the Muppets in their day-to-day lives as they work on their latest entertainment venture, Up Late with Miss Piggy. A late-night show with the self-obsessed Miss Piggy as the host promises to be the perfect setting for Muppet mayhem and mishaps.

To add to the excitement, ABC has now released the 10-minute pitch episode that secured the Muppets’ return to television this fall. Take a look at the full video now!

It is fantastic to see the Muppets back in action, but it isn’t just the nostalgia that makes this mini-episode great. The writing is superb, mixing in the perfect amount of classic gags with more current quips that really give the Muppet gang an updated feel. Kermit’s love of pigs hasn’t fizzled and Fozzie’s knack for telling awful jokes is still evident, but now there are selfies being snapped and Animal fills everyone in on his new CrossFit habit. The tone is overall playful, as expected from the Muppets, but with a more adult brand of humor (so that’s why the band members are always so happy!) which is sure to be an interesting mix. 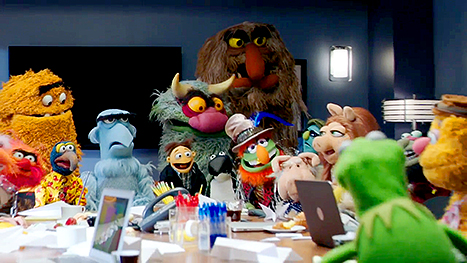