Kids are going back to school, the weather is getting cooler (this is a lie), and pumpkin spice everything is back on the shelves. This means only one thing, fall TV is just around the corner. It’s time to check in with our favorite DCTV shows – first up, Constantine and Arrow! 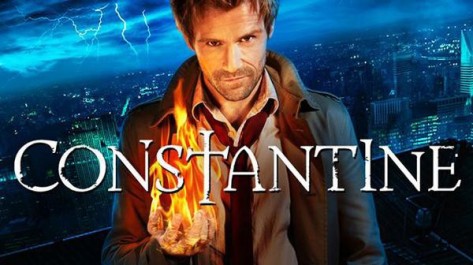 Before we get into this, let’s first pour one out for the dearly departed; Constantine.

While at first blush it seemed that iZombie was the wildcard in the new DC/Warner Bros offerings, it turns out that Constantine was the first to go.  And they left an Emmy nomination in their wake, what a shame. NBC’s loss may be the CW’s gain however.

There have been rumblings for awhile, from big names even, that Matt Ryan’s bad boy demon hunter might make an appearance this season on Arrow. During CW’s presentation at the Television Critic’s Association it was announced that Matt Ryan will appear on Arrow for one episode. On a show that has touted many recurring guest stars that start as one-offs, it’s probably best to read this as “at least one episode.”

Maybe the CW will let him smoke? (probably not)

The CW is an entity of CBS. So, one might surmise that a crossover between CW’s Arrow and CBS’s Supergirl would be a possibility. Right?

Don't look for crossovers between #Supergirl and #Arrow, on sibling networks. But they'll run promos for each other. #TCA15

Thank you TCA for squashing that dream. I mean, Olicity surely can’t last forever, and it’d be nice to see Oliver have a love interest that could legit kick his ass.

Oh wait. This is Arrow off-season , which means there is totally casting news of an Oliver love interest! Say hello to Elysia Rotaru.

For those nervous about what this means for Oliver and Felicity Smoak, don’t be. Well, at least don’t be over this news because it appears that Rotaru (iZombie) will be a love interest in the flashback scenes. I mean, we all know that people from the flashbacks never show up in the current timeline. Especially past relationships. That would be ridiculous.

Perhaps the most fun DCTV news to come out this summer, the Arrow is getting a new, greener, look! 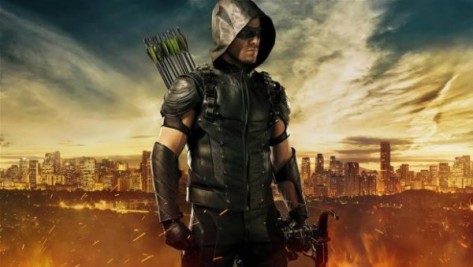 Yes, I know, the old costumes have been green as well, but this one just looks so modern-day superhero-ish. Although, if anyone was still holding out hope that Stephen Amell would be someday donning the golden goatee… prepare to be disappointed. Apparently, after a hiatus, Amell’s beard had grown enough that they tried to fashion the facial hair into the iconic goatee. It is said to have looked bad enough to table the goatee conversation indefinitely. Good to know, we can all move on with our lives now.

As it has been in years past, Arrow has had a ton of casting announcements over the summer. First up, Mr. Terrific! 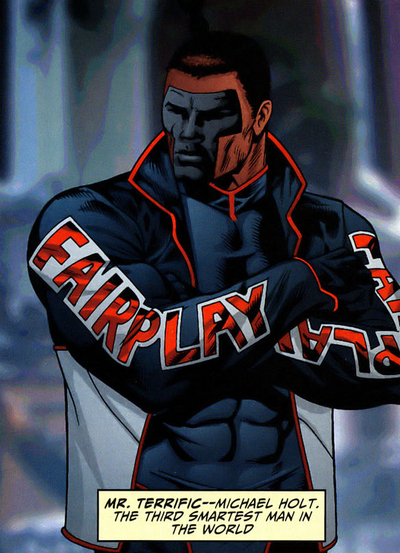 Also as usual, the TV version of Mr. Terrific is going to vary from the comic version. Instead of being named Michael, he is Curtis Hall. And he’s a friend of Felicity. And he’s gay. Given the show’s history, I imagine his penchant for fighting will not be edited. The best part of this new character? The guy playing him.

If you (blinked and) missed Ben and Kate or Sean Saves the World, then you may not be familiar with Echo Kellum. But know that if anyone is up for the task of being a quirky friend of the already quirky-cute Felicity, it is this man.

Another guest star whose character will surely be altered, Teen Wolf‘s JR Bourne will be playing Double Down. However, if there ever was a “superpower” that would incredibly entertaining to see the creatives try to pull off, this would be it. You see, Double Down sort of has tattoos. Except these tattoos are really enchanted playing cards that he peels from his skin when needed and can be used to slice and dice whoever he throws them at.

It is interesting to note that one of Double Down’s storylines with Green Arrow is that he pretty much crashed the wedding of Green Arrow and Black Canary. Hmmm.

When I first heard of the next character arriving in Star City this season, it was a definite :record scratch: moment. Yes, the show has done quite well at altering characters to fit their needs, but this guy, well, it’ll be interesting to witness. You see, there aren’t many Nazis in Star City. Or are there?

All these bad guys will likely be either one-off’s or small story arcs. The big bad of this season of Arrow? That’s none other than Damien Darhk.

Former League of Assassins member, former Heir of the Demon, current head of H.I.V.E., reason R’as al Ghul wanted to destroy Star City… there is so much going on with this character! And the man tapped to play him? He’s no stranger to comic book roles for it is Dum Dum Dugan himself, Neal McDonough.

There was another casting announcement made this week, and it is up for anyone’s guess. Rutina Wesley (True Blood) has been cast in a not yet announced role, for a multi-episode arc. So, chances are this is more than a name drop type of character.

First thought was Vixen. However, an animated show staring Vixen and many of the current CW DCTV voices is premiering on the CW Seed August 25.

Which leads to perhaps Bumblebee? She has been allied with Teen Titans, who fight against H.I.V.E.. Plus, Wally West is coming to The Flash which would lend itself to even more crossover opportunities.
So, Vixen? Bumblebee? Someone else I haven’t thought of? Let me know down below!

UPDATE: It seems as though Wesley will play Liza Warner, aka the Lady Cop.

Before this is wrapped up, I’d be remiss to not even mention (no, not Booster Gold) Stephen Amell’s recent doings in the world of wrestling. So I’m doing just that.

Stephen Amell is apparently a WWE fan. And, somehow WWE’s Stardust found out about this and wondered, publicly, when the actor would host RAW.

When whEn will TV luminary @amellywood guest-host #RAW ? ? ! Lets See h0w he measUres up to certain VILLAINS ⭐️⭐️ pic.twitter.com/otBepl7jO5

This, of course led to Amell returning twitter “threats”.

Which somehow ended up with Stephen Amell in the ring on Monday night.

And that, brought us to this.

So Stephen Amell is going to have a WWE match. Can’t say I ever thought I’d write that. We’ll see how it goes on August 23.

Arrow returns to the CW on October 7.

Stay tuned for the next installment of this DCTV update when we look at the returning The Flash and the new Legends of Tomorrow!