I’ll be the first to admit, I haven’t been pleased with Marvel’s comic lineup as of late.  Besides the wildly popular Secret Wars and A-Force titles, Marvel hasn’t been on the vanguard of evolved storytelling, and as a long time fan, that was disappointing to acknowledge.

That said,  Marvel announced their latest endeavor Moon Girl and Devil Dinosaur, and I pretty much lost my sh*t! 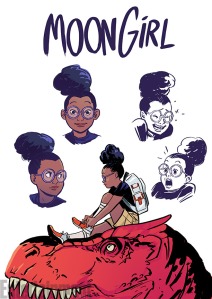 Dinosaurs, sci-fi and comics? Good lord, who read my 9th grade dream journals? All jokes aside, the concept, as exciting as it is, is hardly a new one. Moon Boy and Devil Dinosaur were created by Jack Kirby in 1978, but this time around Moon Boy is replaced by Moon Girl, a black “pre-teen supergenius ” named Lunella Lafayette.

One of the most exciting reveals behind the new comic, is the creative team. Not only do we have two women on board, but one of the said creators is a woman of color.The  creative team includes writers Amy Reeder (Batwoman) and Brandon Montclare (Rocket Girl), and artist Natacha Bustos.

Montclare goes on to describe the symmetry between the dino and Lafayette in her Entertainment Weekly interview:

“What’s really cool is to be able to put a Tyrannosaurus Rex in modern day New York City and also juxtapose with a little girl. You’re going to have a 30-foot dinosaur interacting with a three-and-a-half tall girl…I can’t think of any other book that’s kind of like that, where you have these kind of crazy things that are going to be very different to work on. But if everyone can pull it off, it’s going to be a unique type of storytelling.”

This comic is unlike anything in Marvel’s current slate. It seems to be devoid of superheroics (which isn’t a bad thing),  and looks to focus on fun and vibrant characters. Stories like this could do well for Marvel, not only because of the diverse representation, but from the looks of it, Moon Girl and Devil Dino are far from mainstream comic narratives.  This could ultimately benefit Marvel in the long run with indie comic houses such as Image on the rise.

Moon Girl and Devil Dinosaur has the opportunity to change traditional superhero characterization in multiple ways . Firstly, Moon Girl, though being a heroine, isn’t defined by traditional female-related tropes. She’s a hyper genius with a T-Rex as a sidekick, need I say more? Secondly she’s another young hero added to the Marvel roster without  any association to  junior league teams such as the Young Avengers. From the looks of it, she’ll be her very own person. And lastly, she’s another character of color adding to a current  millennial roster of diverse superheroes such as Kamala Khan and Miles Morales.

Moon Girl and Devil Dinosaur could have some great things in store upon it’s fall release, and we can hope it will mark a much needed step forward with diverse representation in not only the comics, but the bullpen as well.