The first season of The Flash blew audiences away, and may well have helped save the CW. This coming season promises show runners will be bringing their A game for the made for TV DC comic series.

(Spoilers from last season’s finale and season two ahead)

In case you missed it, check out this video from this year’s Comic Con international that breaks down season one and gives a tease to who the main villain of season two will be.

When it premiered last October to an audience of over 7 million viewers, The Flash, along with its predecessor Arrow, has aided CW in achieving their best rated season in years.  The turnaround comes just in time to help secure a renewal deal for CW with it’s parent company Tribune Broadcast, which wont be confirmed until January at the earliest.

In hopes to continue the network’s success, the next season of The Flash sees a few bigger names joining the cast, along with some pretty impressive opponents for our hero Barry Allen (Grant Gustin).

Candyman star Tony Todd has been announced as the voice of The Flash’s new nemesis, Zoom. If Todd’s IMDB is to be believed, he will play a character called Hunter Zolomon/Zoom, though executive producer Andrew Kreisberg told Variety;

“Last year, with the Reverse-Flash, we just modulated Tom Cavanagh’s voice, and this year we wanted to do something a little bit different. Part of the mystery of the season is who or what is underneath the Zoom outfit, and so we wanted to do something like James Earl Jones as Darth Vader — this iconic voice coming out of this mask. Last year, we thought of the Reverse-Flash as a speed warrior; this year, Zoom is like a speed demon, and no one does demon-voice better than Tony Todd.”

In addition to Zoom, The Flash will have his hands full with human bad guys and, spoiler alert, dimension jumping villains. That’s right, that wormhole trip The Flash took last season may have had some inter dimensional side effects.

Among them, a much less friendly version of the comic character Atom-Smasher. Former WWE star Adam “Edge” Copeland will take on the role of the character the CW describes as;

“One of the most powerful enemies we encounter this season, Atom Smasher has come to Central City to kill The Flash. His incredible strength and ability to grow to enormous size makes him more than a match for Flash and the entire S.T.A.R. Labs team will have to come together to find a way to defeat him”

What happened to turn Atom-Smasher against The Flash? The comic version of the character is often more a hero than a foe, but could a new origin story, or perhaps a visits through a wormhole be the answer?

Another new face on the show won`t be another villain for The Flash to face, but another Flash. The original Flash Jay Garrick will join the heroes ranks to help Allen and his team defeat Zoom. Teddy Sears from the Showtime hit Masters of Sex will take on the role of the golden age hero. [Ed. Note – He’s not the first actor to jump from the Showtime series into the DCTV worlds, as Nicholas D’agosto now plays Harvey Dent on Gotham.]

Could Garrick be a visitor from Earth-Two, in a nod to the 1961 story line that brought him out of retirement, and to the parallel world where Berry Allen is The Flash? 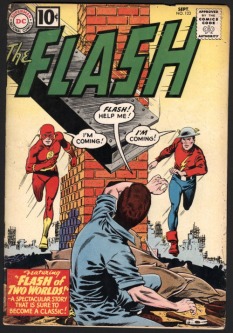 The trailer also featured another ally from the comics, Patty Spivot (Ms. Flash and later Hot Pursuit). Originally appearing in 1977, working in the Central City Police lab with Barry, and eventually sacrifices herself to save Kid Flash (Bart Allen). She was then brought back from the dead for the New52, and is now going to be portrayed by Shantel VanSanten. In the show, she will be Joe’s new partner, and is said to play a similar role to the one Felicity plays on Arrow. We admit to not being overly familiar with her resume, but apparently she was in 57 episodes of the CW show One Tree Hill…

The teaser trailers hint at a season with a bit more power to go with the super, and be filled with mystery. In addition to the secret identity of Zoom, Tom Cavanagh, who played Harrison Wells/ The Reverse-Flash/ Eobard Thawne will remain a cast regular. How, you ask, since Eobard was basically wiped out of existence when descendant Eddie Thawne (Rick Cosnett) shot himself to save the world. Well, wormholes, of course.

Season two of The Flash premiers on the CW October 6. Looking forward to next season? Let us know what you think in the comments below, or visit our Grizzly Bomb Facebook page. 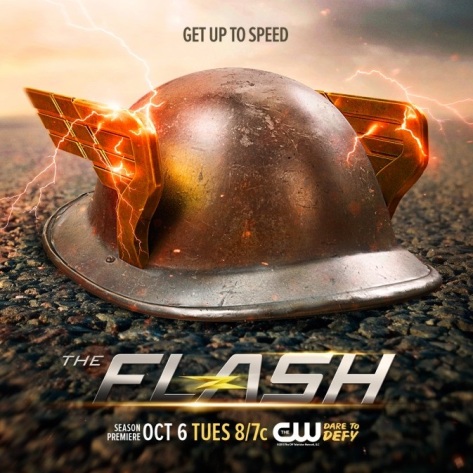