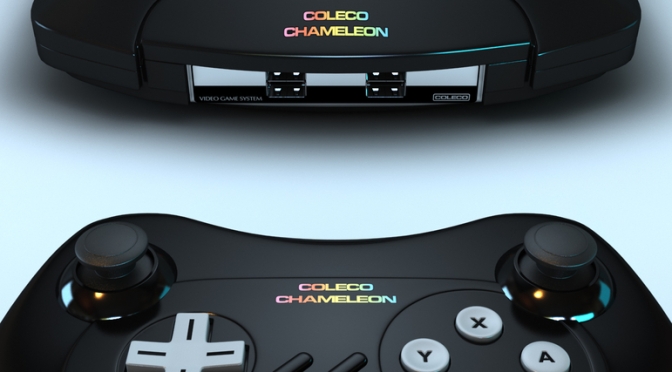 As high tech as the new PS4 and XBox One systems are, it’s sometimes nice to just kick back with something more historical. That retro based gaming sensation is certainly one of my pleasures and it would appear I am not the only one with love for the retro gaming reviews on YouTube and Steam created games, having a very 80s feel to them with graphics and content.

Now one of the original heavyweights of the golden age of gaming, Coleco has stepped up yet again to announce the release of a new console with a very familiar feel to it. The new console called Coleco Chameleon is a sleek, cartridge based system similar to the Sega Genesis from back in the 90s. The look of it is both retro and futuristic all at the same time. Coleco explains the reasoning behind the creation of the console;

Hang around an older video-game fan long enough and they’ll tell you of a time long ago when getting a new game was an event in and of itself. Be it cracking open the shrink-wrap and catching a whiff of that “new game smell,” pouring over the details and illustrations in the game manual, or just taking your cartridges over to a friend’s house, these experiences are all but lost in an age of digital downloads and corporate cost-cutting measures.

The Coleco Chameleon aims to bring these experiences back to the modern age by creating a platform that treats video games as more than just software and eliminates some of the biggest frustrations with modern day gaming:

Durable, long-lasting physical cartridges.  As long as you have the cartridge, you have the game!
High-quality boxes, instruction manuals, and other supplemental materials that make each title a collector’s item worthy of a space on your shelf.

No lengthy system updates:  just plug in your cartridge and start playing!

The system will play 8, 16 and 32 bit titles which will give gamers of a certain era a pleasing smile. There was nothing better than popping in a cartridge or two back in the day. Whether we will have to blow on said cartridges to make them work is unknown at this stage. Coleco is also planning with their partners in retro gaming Retro Video Game Systems, to make brand new games in the retro Coleco style which will certainly be interesting to see.

Retro games always seemed to be a heck of a lot more fun to me than their more modern counterparts, and it seems Retro Video Game Systems, Inc. President Mike Kennedy shares that view.

The COLECO Chameleon is a love-letter to all the classic cartridge based gaming systems that came before it and we love the fact it will succeed COLECO’s successful Telstar and Colecovision product lines.  It will take gamers and their families back to a simpler time where games were all about great gameplay and fun factor.

To find out more you will have to wait for the New York Toy Fair in 2016 when the console will be revealed to all.

If this old school styled console peaked your interest you can also look into the RetroN, or look at the great selection of mash up T-Shirts for sale based on Video Games. Grizzly Bomb has an exclusive interview with the documentary From Bedrooms to Billions which is all about the makers behind the console coder computer games of yesteryear.