Super-strength? Super-speed? Mind control? It’s a debate that can never be settled since there will never be a consensus, and really, it depends on who’s writing the character*. Instead, today we examine some of our favorite lesser-known powers – those that are overlooked, under the radar, or maybe even actively made fun of. Hold onto your hats (or, in our first example, your stomachs).

The power of Grotessa, from James Kochalka’s SuperF*ckers (both the comic and the fine 12-episode Web cartoons), pretty much seems to be that she kind of stinks, can dunk her head in a toilet without a thought, and doesn’t mind hanging out with fellow grotesque creatures, namely the SuperF*ckers’ dripping mascot Grotus. You know who you might appreciate more than, say, Superman if your apartment is backed up with sewage? Someone like Grotessa, who not only wouldn’t mind being in the muck, helping you clean up, but it’s even kind of her thing. And if you are blessed with this ability? Well, shoot, spending hours under your kitchen sink trying to fix a clog just got easier. And you know who your real friends are (cuz, let’s remember, you stink).

As utilized by Arm Fall Off Boy, the most amusing candidate ever rejected by the Legion of Superheroes. See, he can remove and arm, pick it up with the other arm, and use it as a bludgeon. Simple. Uncomplicated. Possibly effective in the right hands . . .er, make that hand. And think of the possibilities when grappling – Ronda Rousey gets you in that killer arm bar? Just detach the arm. She’ll still probably kick your ass, but at least you won’t immediately tap out.

As seen used by Doug Ramsey, the most tragic of the original New Mutants. He can speak and understand any language. If he was invented in the cyber era, he would be king: imagine the best hacker ever, the most able coder alive. The money he could generate via apps or nefarious means, the information he could crack into . . . the possibilities are endless. But in the pre-Smartphone era, Doug Ramsey was treated as a useless member of the junior X-Men, and killed off too quickly, but since his resurrection (hey, it’s Comics!) it seems his abilities are being treated a little more seriously. 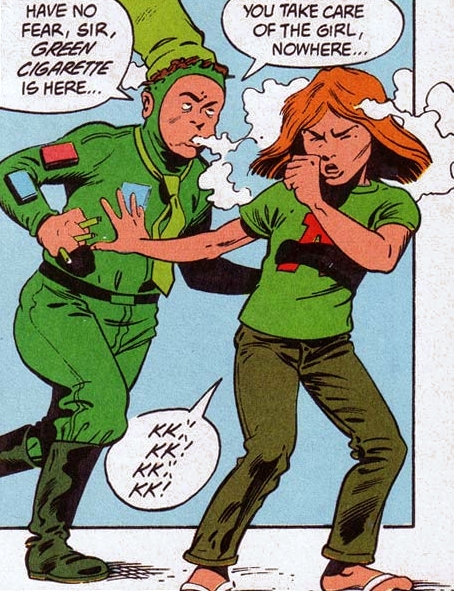 As demonstrated by incredibly obscure DC Comics character, the Green Cigarette (caveat: in his mere five appearances, it’s not like they’ve done a complete dossier on GC’s powers, so this is speculation). You know what is a really insulting move to pull on someone else? Blowing cigarette smoke in their faces. You know who can blow cigarette smoke in someone’s face at will? The Green Cigarette. Great for fighting children with incredible powers yet lungs that have never been exposed to the late-night bar scene, causing them to go into coughing fits. If you had this power, you could piss people off at will without resulting in true violence . . . though we’d guess using “cigarette powers” in public is probably illegal in the places where public smoking is also forbidden. Alas. 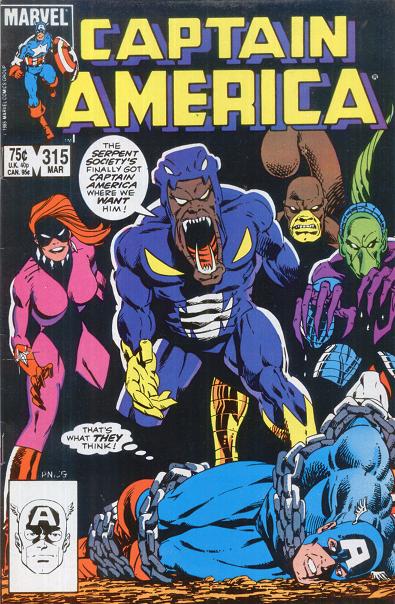 As used by Marvel Comics’ villain Cottonmouth. You know what’s totally freaky? Opening your mouth abnormally large so you can eat people’s faces. For supervillainy, I guess we’re skeptical, but think about the bets you could win down at the local pool hall – “how many billiard balls did you say you can fit in your mouth, son?” Maybe even a bowling ball. What a sight to see. In terms of the lowest comic denominator – a.k.a., is it useful in a fight – we’ll say this: intimidation counts. And that classic cover shows just how intimidating Cottonmouth can appear. Poor Cap.

As alluded to by Nightbird (Jordan Ladd) in The Specials. Long before James Gunn was masterminding Marvel Comics-based space action with Guardians of the Galaxy, he created a quirky superhero spoof of a movie called The Specials.** All the heroes are of questionable caliber, but one of Nightbird’s powers is especially amusing. She claims she can lay eggs that have tricks, and doesn’t really expand beyond that. But when another character proposes she could conceptually lay an “acid egg,” she never contradicts that theory. Laying eggs filled with whatever kind of liquid you needed would be very keen in a variety of situations, from partying (vodka egg!) to holidays (eggnog egg!) to vampire fighting (holy water egg!). And if the “tricks” expand beyond liquids – into the truly bizarre, like hatching dinosaurs or robots – then we have a fun, if still awkward, superpower. 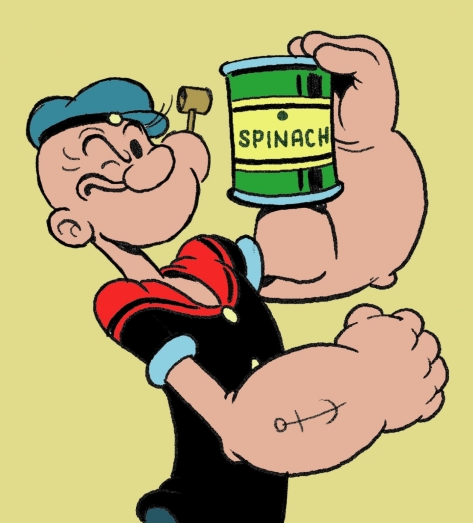 As embodied by Popeye the Sailor Man (cartoon version) via spinach, and, to a lesser extent, Scooby-Doo via Scooby Snacks, Hour Man via Miraclo. Do you think Popeye cartoons would have been nearly so charming if the balloon-armed sailor man always instantly kicked Bluto’s butt? No, of course not. Popeye rarely went to his ace-in-the-hole until he really needed it, which kept the conflict interesting until the denouement (we bet you’ve never seen “Popeye” and “denouement” in the same sentence before, have you?). Similarly, Hour Man is an interesting profile in the need to be heroic versus the dangers of drug addiction; Scooby shows how the power gluttony can temporarily overcome cowardice (and don’t tell us that a goddamned huge Great Dane does not have some measure of super strength). Point being, heroism that requires some kind of trigger to activate is inherently more interesting than the “always on” kind.

As introduced by See-More from The Hive 5 (from the Teen Titans cartoon). Vision powers are nothing new (see Superman, Cyclops) but behold See-More’s multipurpose power eye. First inkling it was more than just super-sensory and more than just an energy blaster is when he shoots his eyeball completely out of its socket at Kid Flash. Then, later in the same episode, DUDE TURNS HIS FREAKING EYE INTO A SORT OF FLOATING HOT AIR BALLOON so he can spy on KF from the air (see pic). What? Gross! Here is a man who is unafraid to touch his eye. Handy if you ever need to wear contact lenses. So many uses and such a fun application of what most people consider their most (okay second-most) sensitive area.

C’mon, you know who does this. And we don’t give a blowfish what you think, talking to sea life would be cool. Find treasure. Scout out the surf spots to avoid crowds. Figure out the mysteries of the deep. There are entire companies and academic departments dedicated to figuring out what a gal with this power could find out in a mere conversation. Aquaman FTW.