DC’s Legends of Tomorrow started off with a bang, but is this only the proverbial tip of the iceberg?

The ability to time jump means the potential to explore everything form the golden age of comics to the new 52, and everything in between. Stephan Amell of Arrow fame, the one who started it all, will appear in the new spin off, but not until the end of season one.  Marc Guggenheim, the shows executive producer, was quoted by Entertainment Weekly as saying;

“Every once in a while, we do an episode where the 10-year-old me has to pinch himself… We’re not only introducing our version of Connor Hawke to our universe, we’re going to meet the 2046 version of Oliver Queen, and Stephen Amell is going to be reprising his role from Arrow. As an added bonus to comic-book fans, Oliver is missing his left arm and will be sporting a goatee, in a nod to the character’s appearance in the seminal Dark Knight Returns. We think this episode features some of the coolest things we’ve ever done.” 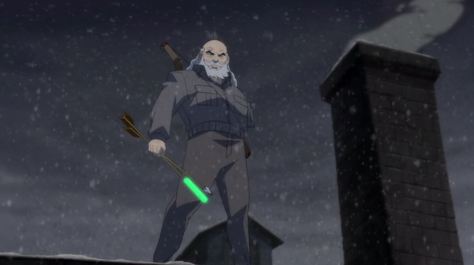 But that’s not all. DC has been teasing these future appearances via their Instagram.

This bounty hunter has his share of scars, but that won't stop him from tracking down his target–dead or alive. Screenshot this image and use filters to reveal the answer, and share your findings with #LoTEasterEggs! @cw_legendsoftomorrow: Thursday at 8/7c on the CW

Jonah Hex is not the only character fans can look forward to seeing. Golden Age characters Dr.Mid-Nite, Sgt. Rock, Sandman and Hourman have been teased, as well as the original Red Tornado.

The original blind vigilante, this hero sees perfectly in pitch black and uses blackout bombs to block light. Screenshot this image and use filters to reveal the answer, and share your findings with #LoTEasterEggs! Thank you for following along with our #LoTEasterEggs, and don't forget to check out @cw_legendsoftomorrow: Thursday at 8/7c on The CW.

This G.I. is the cornerstone of his unit. The men who follow him into battle know one thing for certain: nothin's easy in Easy Company. Screenshot this image and use filters to reveal the answer, and share your findings with #LoTEasterEggs! @cw_legendsoftomorrow: Thursday at 8/7c on The CW.

Criminals beware–this mystery man goes against the grain, and he won't hesitate to put you to sleep before you strike. Screenshot this image and use filters to reveal the answer, and share your findings with #LoTEasterEggs!  @cw_legendsoftomorrow: Thursday at 8/7c on The CW.

With this hourglass, its pharmaceutically empowered owner can peer into the near future. Screenshot this image and use filters to reveal the answer, and share your findings with #LoTEasterEggs!  @cw_legendsoftomorrow: Thursday at 8/7c on The CW.

The armor may be DIY, but this guy is no pushover–come to think of it, he's not a guy at all. So who's under that pot…? Screenshot this image and use filters to reveal the answer, and share your findings with #LoTEasterEggs!  @cw_legendsoftomorrow: Thursday at 8/7c on The CW.

That’s quite the golden aged lineup! While the first Arrow spin-off The Flash has a lighthearted, decidedly CW feel to it, it seems as though Legends is going for a slightly darker tone.

Time travel and an ever expanding universe leaves the door open to any number of crossovers with other DC shows. CBS president Nina Tassler has talked about the fact that their network is open to a crossover, but hopes that their own DC property Supergirl, will first stand on its own. Executive producer Greg Berlanti is the man behind Arrow, The Flash, Legends of Tomorrow AND Supergirl, so it’s not surprising that the new CBS show has already made reference to the Arrow-verse.

Legends of Tomorrow airs Thursdays at 8pm on CW

What DC characters would you like to see on the small screen next? Let us know in the comments below, or visit Grizzly Bomb on Facebook to join the conversation.