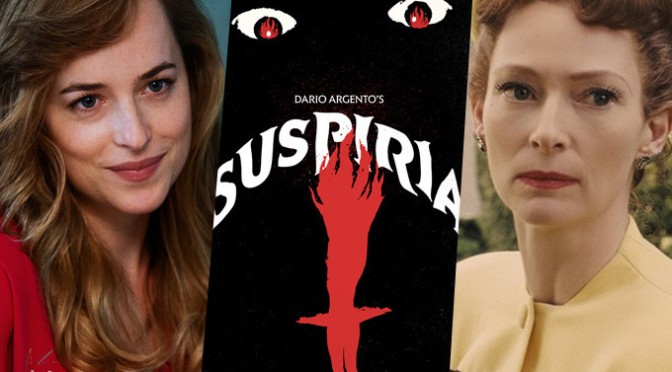 During a Q&A, director Luca Guadagnino revealed that his remake of Dario Argento’s Giallo masterpiece, Suspiria will star Dakota Johnson and Tilda Swinton, above, will both star in the remake that’s to be set in 1977 Berlin.

The director of I Am Love, Luca Guadagnino took over the project after David Gordon Green‘s long-in-development iteration fell apart. We know that the Suspiria remake will:

First off, Tilda-Freakin’-Swinton. Already one of the best and most respected actresses on the planet, capable of disappearing into her roles and delivering an otherworldly, ethereal quality capable of seriously creeping anyone out if she so chooses. Secondly, Dakota Johnson, who even if she isn’t up to Swinton’s caliber is no slouch. Hell, she made Fifty Shades Of Grey almost passable…almost. She seems sufficient enough for Jessica Harper’s role.

Here are a few key-quotes Guadagnino made during that Q&A in Australia:

“The film by Dario Argento was a very indicative moment of growing up for me because I saw it when I was 14,” the director recently said of the remake. “I think it changed me forever. I was obsessed [with Argento] through all my adolescence. [My version] is going to be set in Berlin in 1977. It’s going to be about the mother and the concept of motherhood and about the uncompromising force of motherhood. It’s going to be about finding your inner voice – the title is very evocative on these grounds.”

“The movie by Dario Argento was maybe a child of its own times. It’s very delicate, almost childish,” he continued. “I have a very strong interest in German literature and film, so I think [my] Suspiria will have to focus very strongly on that moment in history, in 1977, when Germany was divided and a new generation was claiming and asking to recognise the debt of guilt that forged the new Germany after the war against the fathers who wanted to deny the responsibility.”

Now, who is this Fassbinder? He was a director part of the German

New Wave of the seventies. Prolific for his speed and efficiency, Rainer Werner Fassbinder completed forty feature-length films; two television film series; three short films; four video productions; twenty-four stage plays and four radio plays; and thirty-six acting roles in his own and others’ films in less than fifteen years. His creative energy, when working, coexisted with a wild, self-destructive reputation as the enfant terrible of the New German Cinema. Fassbinder died in 1982 at the age of 37 from a lethal cocktail of cocaine and barbiturates. Such a fascinating figure sounds like an interesting fit for Giallo like Suspiria set in Berlin.

Filming of Suspiria was to begin last month, so let’s see if anything even comes of this. Are you interested in a Suspiria remake at all? Let us know in the comments below.