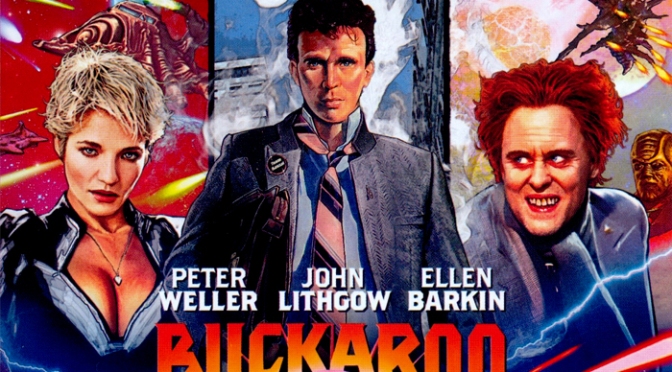 Kevin Smith is about to make everyone’s greatest desire a reality. Well, as long as that desire is to see Buckaroo Banzai and the Hong Kong Cavaliers finally take on the World Crime League. Yes, the promise that was made to all of us in 1984 will finally be fulfilled: Buckaroo Banzai is returning!

Smith, fresh off his directorial success with The Flash television series, has signed on to develop a series with MGM based on The Adventures of Buckaroo Banzai Across the 8th Dimension. The oh-so-classic ‘80s movie followed Buckaroo Banzai, a man who could perform brain surgery, build a jet car, and put on a rock concert all on his lunch break while battling aliens to save the planet. MGM contacted Smith after the Buckaroo Banzai-fanboy, along with stars Peter Weller and John Lithgow, did a panel about the film.

Smith’s passion for the cult favorite is undeniable. In a May episode of the Hollywood Babble-On podcast, Smith talked excitedly about how the movie shaped his own style of filmmaking. When his agent called him about MGM’s proposal, Smith responded:

It was very dramatic. He was like, ‘you know this?’ and I was like, ‘dude, this was my childhood.’ This is one of the reasons I make fucked up movies, why I can’t be like J.J. [Abrams] and shit. A, I’m not talented and B, because Buckaroo Banzai was the shit that appealed to me. They didn’t do it straightforward; they did it very left of center – very funny movie, very weird. So because of the weird movies I’ve been doing lately – Tusk and Yoga Hosers – and because I dove into TV, suddenly people went like ‘two plus two equals five, let’s have him come in.’

Yeah, Tusk was pretty damn weird – which is why Smith is a great choice for the new Buckaroo Banzai series. His love for the odd and oddly funny will mesh well with the universe presented in the original film.

The series is still in development, but Smith wants to bring back members of the original cast (which includes Weller, Lithgow, Christopher Lloyd, Ellen Barkin, and Jeff Goldblum) to play as different characters – and even suggested Weller could be a villain in the series. Smith’s plans are to cover the original storyline over the first season with the second season introducing a new story: Buckaroo Banzai versus the World Crime League. It looks like the sequel we were promised at the end of the original film is finally on its way, three decades later.