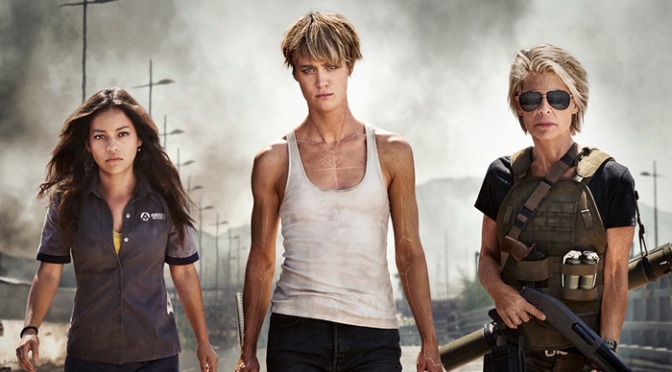 Paramount has released the first teaser trailer for Terminator: Dark Fate, the sixth Terminator movie but the first to have the direct involvement of original mastermind James Cameron since the first two movies.

Check out the first badass trailer for Terminator: Dark Fate below:

This trailer has a lot of footage shown to attendees at CinemaCon. We get our first look at the new Terminator, played by Gabriel Luna (Ghost Rider on Marvel’s Agents of S.H.I.E.L.D.) on the trailer of a new character, played by Natalia Reyes. Reyes’ character is being protected by yet another Terminator, this one (surprise surprise) is played by Machenzie Davis. That’s right, one of the stars of Halt and Catch Fire is basically the new Arnold Schwarzenegger of Dark Fate. But don’t count Arnold out just yet. Since he absolutely melted himself down at the end of T2, we’re not sure how he’s back but…yeah. Guess we’ll have to wait till November to find out.

Steering the story spearheaded by Deadpool director Tim Miller, James Cameron comes aboard as producer. Cameron is also credited for the film’s story along with Charles Eglee, who created the Cameron-produced TV series Dark Angel starring Jessica Alba. Additionally, Josh Friedman, who created the TV series The Sarah Connor Chronicles with Lena Heady is also on board, along with David S. Goyer (Man of Steel) and Justin Rhodes (Grassroots) all earning separate “Story By” credits. It’s a lot of names thrown into the hat on the film’s “story” alone, but the screenplay is credited to Goyer and Rhodes with Captain Phillips‘ scribe Billy Ray. This is likely due to Ray probably coming in to do a rewrite of the Goyer/Rhodes’ script.

Just a day before the first trailer dropped, Paramount also released the poster for the film which spotlight’s Hamilton’s return as Sarah Connor for the first time since 1991 (aside from some audio for Salvation).

Terminator: Dark Fate will be released on November 1.