Netflix has released the first official trailer for The Dark Crystal: Age of Resistance. Based on The Dark Crystal, Jim Henson’s groundbreaking 1982 feature film, this 10-episode series tells a new epic story, set many years before the events of the movie, and is realized using classic puppetry with cutting edge visual effects.

Check out the first trailer for Netflix’s The Dark Crystal: Age of Resistance below:

The fantasy adventure series will star an ensemble of fantastical, state-of-the-art creatures created by Jim Henson’s Creature Shop™ and Brian Froud, the original feature’s conceptual designer. And, as the trailer shows, the Henson knack for doing as much in-camera as possible is on full display. Very little CGI, vast matte-style production design, and loads and loads of muppets!

In an interview with Entertainment Weekly, Leterrier said he was determined to make the series look as similar as possible to the original film, which meant the use of insistence on puppetry rather than CG. “I was not fighting against anyone; I was fighting against common sense and practicality,” he says with a laugh. “It’s so, so complicated to build a puppet, hire puppeteers, all that stuff. We chose the long, hardest road, and we’re very thankful [we did]. It looks absolutely stunning.”

Check out the beautiful poster for the series as well: 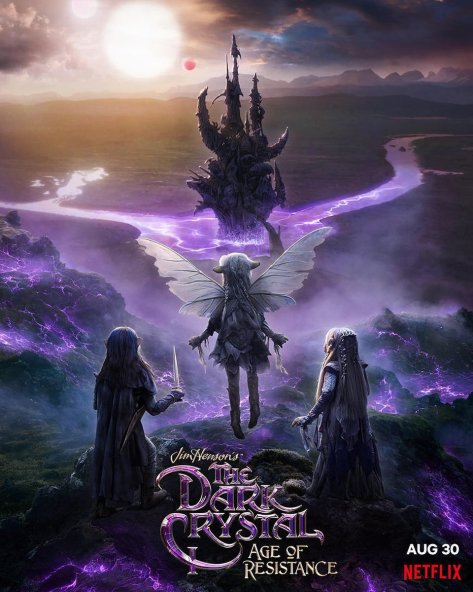