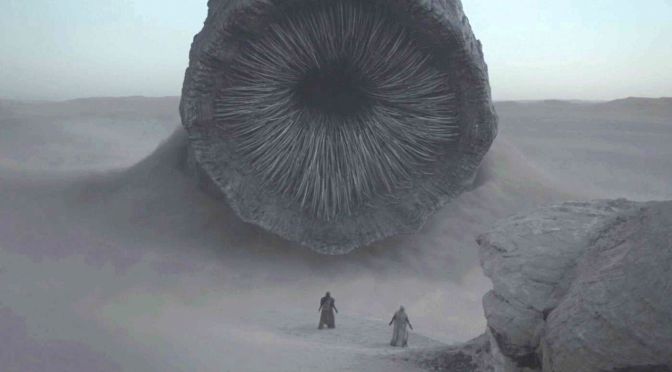 A mythic and emotionally charged hero’s journey, Dune tells the tale of Paul Atreides (Timothée Chalamet), a brilliant and gifted young man born into a great destiny beyond his understanding, who must travel to the most dangerous planet in the universe to ensure the future of his family and his people. As malevolent forces explode into conflict over the planet’s exclusive supply of the most precious resource in existence — a commodity capable of unlocking humanity’s greatest potential — only those who can conquer their fear will survive.

Check out the first trailer for Dune below, which is set to a rendition of “Eclipse” by Pink Floyd and dammit does it work!:

The trailer showcases short glimpses from just about the entire cast. Chalamet is, obviously, playing the young antihero Paul Atreides. Oscar Isaac plays Paul’s father, Duke Leto Atreides. Rebecca Ferguson plays his mother, Lady Jessica. Actor Zendaya plays Paul’s love interest, a mysterious woman with glowing blue eyes named Chani. The two warriors Gurney Halleck and Duncan Idaho who end up training Paul in combat are played by Josh Brolin and Jason Momoa. Stilgar, the leader of indigenous people called Fremen is played by Javier Bardem. Stellan Skarsgard plays Baron Vladimir (leader of House Harkonnen from Arrakis that battles with the Atreides family) and he’s typically disgusting as his character rightfully is. Charlotte Rampling plays the reverend mother of an order of women called the Bene Gesserit who can read and control minds. Paul’s own mother Jessica is also part of the Bene Gesserit. finally, Sharon Duncan-Brewster will be appearing as Dr. Liet Kynes who tries to keep the peace.

Villeneuve is best known for his movies Arrival and Blade Runner 2049, as well as notable “smaller” films such as Sicario, Prisoners, Enemy, and Incendies. Villeneuve, Eric Roth (A Star is Born) and Jon Spaihts (Pacific Rim: Uprising) wrote the screenplay, of which is based on Frank Herbert’s first novel. Herbert wrote six novels in the Dune series, beginning in 1965. The books were adapted into David Lynch’s 1984 movie, as well as two TV miniseries. Game of Thrones language creator David Peterson is developing languages for the film. Award-winning film composer Hans Zimmer will be scoring the film.

This all has the makings of an incredible big screen adventure. All of the key players have had huge successes both critically and commercially but there’s a lot riding on Dune. Both its price tag and epic length, the film is the first in a long-line of sequels and spinoffs that are planned to play out through the next few years. Judging by the first trailer, everything is looking very, very good but only time will tell, and whether the world is really ready to head back to the theater.

Dune is still scheduled to be released on December 18, 2020, though given the shifting landscape of theater releases it’s unclear if these plans will remain in place. Warner Bros, released Tenet as a theaters-only premiere so the same strategy could be used for Dune (where the film had a short trailer teaser before select screenings).