In news that will blow the minds of animation fans everywhere, Fox has decided to merge two of its most popular animation shows for one incredible episode. Yes, the Griffin family are going to come head to head with the Simpsons (thanks to Collider for the info). This merging of shows might be due to another one of their popular animation shows American Dad moving on to TBS (scheduled for 2014), and they may be feeling the loss of this show very soon. What better way could there be to ease the pain of this loss and get the ratings up, then having this incredible meeting of the world’s most famous cartoon families. Scheduled for next fall and called The Simpsons Guy, below is a brief rundown of the plot:

[box_dark]Peter (Seth MacFarlane) and the Griffins get out of dodge and end up in Springfield, where they are greeted by a friendly stranger named Homer Simpson (guest voice Dan Castellaneta), who welcomes his new “albino” friends with open arms. The families get along famously: Stewie (MacFarlane) becomes obsessed with Bart (guest voice Nancy Cartwright) and his old-fashioned pranks; Lisa (guest voice Yeardley Smith) takes Meg (Mila Kunis) under her wing and is determined to find something – anything – at which she excels; Marge (guest voice Julie Kavner) and Lois (Alex Borstein) ditch housework for a little bonding; and Peter and Homer fight over the best beer in town – Pawtucket vs Duff.[/box_dark]

I have to be honest, I never saw this coming myself even with both shows airing on the same network. It’s great that the cast from The Simpsons were up for this, with all the original voice actors playing their parts. As it is set in Springfield, we must see some more of the residents popping up throughout this episode. The interesting thing for me is what tone will the episode have? Both shows feature quirky families and have a heart and moral message in most of their episodes, but they go about them a very different way. Will the shocking humor of Family Guy manage to gel with the more restrained comedy of The Simpsons? What animation style will they be using as both have distinctive art for their shows? This sounds like incredible news and hopefully this will not be the last encounter between the two families.

What do you think of the meeting between these two TV families? Sound off in the comments section below!

Please find enclosed 1 (one) Griz Bin. We hope that you find its contents of comic randomness to your taste and we apologize for the lateness of its arrival.

5 Classic Superman Comics That Prove He Used To Be A Dick – Think the Man of Steel was always the big boy scout we usually think of him being today. Nope. He used to be a massive tool and here’s the proof. [Cracked]

Comic Covers Recreated With Family Guy – See Peter Griffin as (amongst others) Spider-Man, Batman and Superman in these recreations of classic comic covers. My favourite is the Fantastic Four one that includes the entire Griffin clan. [Herochan]

9 Reasons To Elect A Supervillian President – The US is to shortly head to the polls, and for all of you Americans yet to make up your minds, here are some decent reasons to vote for the greater, rather than the lesser, of evils. [io9]

Kia’s Batman Themed Car – DC and Kia have joined forces to make a range of Justice League themed cars. Here is the Batman one and it’s no Tumbler. [Geekologie]

DC Collectibles Unveils High-End Prints – They may be more expensive by some of these would look good on anybody’s wall. Who could resist Ace the Bathound, Krypto and Streaky? [Comics Alliance]

New York Comic-Con Cosplay – There was a vast array of great cosplay at the recent con. Whilst it’s not all comics related it’s all far too fabulous to not include. [io9, Comics Alliance 1, 2, 3, Gamma Squad 1, 2, 3, and Geeks Are Sexy 1, 2]

And Finally – We end with the news that Superman is quitting the Daily Planet as told in the inimitable CG style of Taiwan’s NMA. [Comics Alliance]

So until next time…’keep watching the skies!’

I want to know what star Seth MacFarlane had sex with, and then how good that sex had to be that the star then went and told all the other stars that they should go ahead and align in Seth MacFarlane’s favor this year. Seriously.

END_OF_DOCUMENT_TOKEN_TO_BE_REPLACED

There’s a crisp note in the air (actually here in south Georgia there is no such thing but I like to pretend) which means fall is back and so is Saturday Night Live! Saturday’s premiere was hosted by a man known more for his voice than his face, Seth MacFarlane. I feel the need to be honest here, I actually can not stand Seth MacFarlane. I know, I know… it’s incredibly hard to believe, but it’s true. There is a very good chance my hatred stems from the fact that my husband watches two categories of television:

END_OF_DOCUMENT_TOKEN_TO_BE_REPLACED

See if this film synopsis rings a bell with you…

The time is the future, 17 years after the war. What war you ask? It’s never revealed but that’s not important to the plot. America is now a prison camp with an Artificial Intelligence running the show. Cyborgs do the day-to-day bidding of the A.I (in this film however only one cyborg is ever shown).

END_OF_DOCUMENT_TOKEN_TO_BE_REPLACED

Here at Grizzly Bomb we wanted to do a little something for Mother’s Day, and we’ve decided to share our favorite TV Mom’s, and what makes them great. Some of the videos are NSFW, consider yourself warned.

A character originating in the 1930s from New Yorker comic strips, Morticia Addams was the matriarch of the coolest family on TV. Much of my childhood was spent watching the 5-7 pm block on the old Family Channel which contained 2 episodes of Batman, as well as 2 episodes of The Addams Family. This may be why I was the only 8 year old I knew who was really excited for the 1991 movie. Anyhow, I loved that show, and it was all held together by the object of Gomez Addams’ affection – Morticia. Played for 64 episodes between 1964 and 1966 by Carolyn Jones (who was also on the 60s Batman show). She would later reprise her role multiple times, maybe most notably in my favorite 70s cartoon – The New Scooby Doo Movies (Where Jodie Foster voiced Pugsley Addams).

END_OF_DOCUMENT_TOKEN_TO_BE_REPLACED

Chances are if you are a 20-something fun individual you have at one point or another enjoyed a good session of Family Guy. If you know Family Guy then I would wager your favorite characters are either Peter, Brian, or Stewie. So you will probably be pretty excited to hear that Seth MacFarlane’s new film Ted finally has a trailer out, which is Red band. That means NSFW, people. Ted stars Mark Wahlberg and Mila Kunis (shut up, Meg) and of course, Seth MacFarlane as the voice of Ted.

END_OF_DOCUMENT_TOKEN_TO_BE_REPLACED 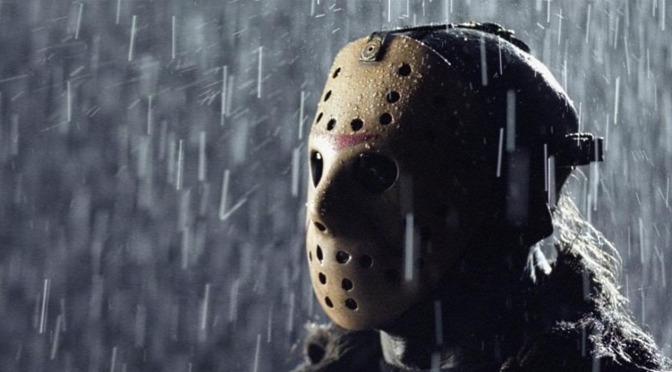 So here we are again – Friday the 13th. And for most people whose brains are as riddled with graphic violence as mine is, that screams Jason Voorhees.  With 32 credits on his IMDb page since 1980, it’s easy to see how he’s become a big part of popular culture. Jason is one of the most recognizable genre characters of all time, which is why we’ve seen him pop in other mediums. From Robot Chicken, The Simpsons and Family Guy, to The Arsenio Hall Show.