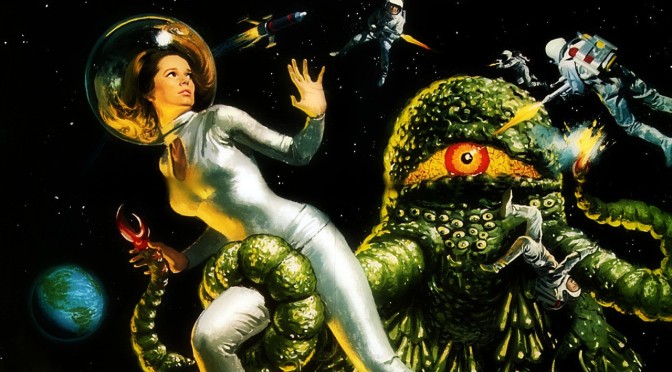 Halloween represents many things to many people and, for whatever reason you choose to celebrate you can be sure others will be doing the same in their own way. If your chosen form of celebration happens to be a party, then the dressing up and horrific elements of the season take on a whole new meaning. However with every great party, you need great tunes to keep it going. Now last year I compiled a collection of some of my favourite Halloween related tunes to give you all a frightfully good night. This year I have turned to film for my inspiration. So without further ado here is a selection of some of the catchy horror tunes perfect for a good night in.

END_OF_DOCUMENT_TOKEN_TO_BE_REPLACED

Although Comic-Con is all about news and previews and sneak peeks, let’s be honest, the cosplay is a pretty big draw as well.

Everything from sci-fi movies to video games to cartoons, cosplay is the perfect way for everyday fans to have their moment in the sun, even if that moment involves shaving your chest hair into the Batman symbol.

We’ve scoured the internet for some of the best examples of Comic Con cosplay so far and you can check them out in the gallery below.

Remember to follow Grizzly Bomb on tumblr to check out Brian and Chris’ experiences in San Diego including this great Jack Skellington cosplay!

Stay tuned here to Grizzly Bomb for all your Comic-Con news updates!

It’s no Hollywood secret that Tim Burton has lost it and hasn’t made a single good film in the last decade (probably because he keeps casting his psycho wife).  However, his first claymation attempt just happens to be one of my favorite movies, holidays aside.

Nightmare Before Christmas pairs together my two very favorite holidays: Halloween and Christmas; and throws in a little musical pizzazz, which I love!  The story centers around Jack Skellington, the Pumpkin King, whose fame in Halloween Town is only diminished by his lack of interest in doing his job.  He is sick of Halloween, of scaring, of the routine; and wants to find something more meaningful to do with his life.

In his morose state, Jack wanders and finds himself at a cluster of trees, which the audience knows must represent the different holidays.  Here, Jack opens the door to Christmas Town where his life is drastically changed.

In Christmas Town, Jack feels a warmth that he is unfamiliar with and desperately tries to duplicate it.  When he returns to Halloween Town, he shares his discoveries and announces that the residents of Halloween Town will take over Christmas.  He sends kidnappers to snare “Sandy Claws” and begins his Nightmare Before Christmas, as it were.

Jack and his cohorts are impossibly scary, and he does such a poor job with the gifts that he is blasted out of the sky and it is announced that Christmas will be canceled.  Jack is distressed and heartbroken.  He returns to Halloween Town to release Santa, the only one who can save Christmas.

In the end, Jack realizes that he doesn’t need to take over Christmas or even be a part of Christmas to find what he is looking for.  Running Halloween is what he was born to do, but he has found joy and warmth in his love with Sally.

I’m a sucker for claymation, I don’t know why.  Blame the California Raisins I guess.  Couple that with the brilliant score by Danny Elfman and you have, in my eyes, a winner and a great holiday favorite.