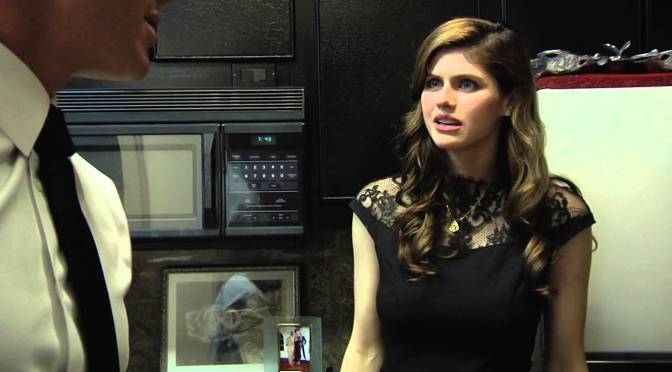 There’s been a lot of Texas Chainsaw news lately, and in the tradition of hotties wearing tight jeans and white tanktops, Alexandra Daddario will be the female lead in the new 3D installment of The Texas Chainsaw Massacre. If you’re confused as to who Daddario is, then look no further than Percy Jackson and The Olympians: The Lightning Thief, where she had her first big role as ‘Annabeth Chase’. It’s not her fault that the Percy Jackson movie sucked, because she performed exceptionally in it. I think ‘Grover the Satyr’ was like the ‘Jar Jar Binks’ of that franchise.

More recently she was in the comedy Hall Pass, which I missed because of my burning hatred for Owen Wilson, (plus Doc said it sucked). The next movie she stars in,  Bereavement, is the prequel to the 2004 cult hit Malevolence, and comes out next month. This one I don’t need to know too much about because I didn’t see Malevolence, but based on the picture below it’s all I need for motivation to see it.

Daddario has a lot to live up to for this installment of TCM. She’s following in the footsteps of Jessica Biel and Jordana Brewster which isn’t easy, but based on the photo above I for one think she’ll do just fine.