And, most significantly for the superhero-obsessed, the recent Justice League animated series. Both of ’em — Justice League, which focuses on the big seven (Superman, Green Lantern, Flash, Wonder Woman, Martian Manhunter, the Flash, and Hawkgirl) and Justice League Unlimited (JLU), which brings in DC Comics heroes by the truckload.

We highly recommend the whole series, but below we break out the 10 episodes that, for one reason or another, are our absolute faves.

(Slight caveat: the original series are all two-parters, so we’re considering each pair an “episode,” while JLU episodes are largely one & done).

Ever want to see a bunch of villains whupping ass on a bunch of other villains? You’ll never laugh at Toyman again, or at least not in quite the same way. And Luthor’s showdown with Gorilla Grodd is so damned sweet. Other combatants include heavyweights like Bizzaro, Sinestro, Giganta and Rampage, as well as jobbers like Goldface, Heatwave, Copperhead, Merlyn (the archer, not the wizard), and Evil Star. Yeah, there’s a DC villain named Evil Star. The lameness is what makes it lovely. Oh, and the ending is just full of Jack Kirby goodness.

The dang series finale, where Darkseid attempts to turn Earth into another Apokolips and get revenge on Superman. Fire pits, Parademons, cameos from a gajillion DC superheroes (Aztek! Steel! Metamorpho!), a team-up with the villains that remain after the events from the last episode, a supreme throwdown between Superman, who finally takes off his kid gloves, and Darkseid . . . and proof that Luthor is better than both of them. Anti-Life Equation, anyone? Indeed, Luthor at his snotty, superior best, and the world lives or dies by his hand. 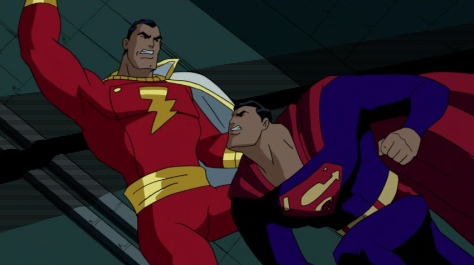 Captain Marvel, a.k.a. The Big Red Cheese (you know, the grade-schooler who yells SHAZAM!, and with a bolt of lightning becomes “The World’s Mightiest Mortal”) is manipulated into facing off with his idol, Superman. Luthor’s behind it, yet again, but this episode is all about Billy Batson and his alter-ego.

If there was a breakout character from the JLU series, it was the Question, who here was portrayed as a paranoid conspiracy theorist who, thanks to his phenomenal detective skills and antisocial obsession, may just prove those conspiracies right. This episode sees “Q” and the Huntress squaring off against fellow “power couple” Green Arrow and Black Canary in a story of revenge. 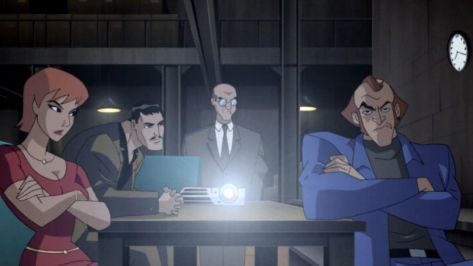 You can’t call them “The Suicide Squad” on a show meant for all ages, but comics fans know what the team of villains doing the government’s bidding for a chance at a commuted jail sentence is really called. Featuring Captain Boomerang, Deadshot, Clock King, Plastique, and Col. Rick Flag, the government agent who tries to keep the miscreants in line. The mission? Break into Justice League Headquarters (an orbiting satellite, no less) to steal an artifact of unimaginable power.

The Flash Museum’s grand opening is nigh, and humorless Orion of the New Gods and Batman are on hand to witness their teammate get honored. A fun look into how the generally lighthearted Flash handles crime on his home turf, and how his goofy rogues gallery of villains — Captain Boomerang, the Trickster, Mirror Master, and Captain Cold — aren’t quite the jokes Orion thinks they are. [Bonus suggestion — to see Flash get damned serious, check out JLU Season 1, Ep. 25 — Divided We Fall.]

The team is shanghaied to an alien world that’s under the boot of a cruel dictator. They not only face a gladiatorial arena but have to fight Mongul himself.

The Joker didn’t appear much in this series (and not at all in JLU), but hot damn this is a good one. The Joker and his superpowered cronies, the Royal Flush Gang, terrorize Las Vegas with a series of hidden bombs that may only be masking a larger doomsday plot. 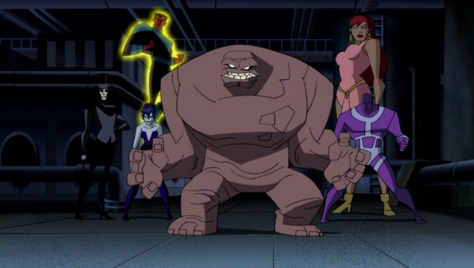 What if a team of villains, handpicked by a gorilla with genius-level intellect, plotted the end of the Justice League? Gorilla Grodd, the Shade, Giganta, Killer Frost, Star Sapphire and Clayface come closer than you might think when it seems the JLA’s teamwork is simply falling apart at the seams.

Thinly veiled tribute to DC’s Marvel-ous competition’s “Defenders,” Aquaman, Solomon Grundy and Dr. Fate (respectively reminiscent of Submariner, the Hulk, and Dr. Strange) venture to stave off an entity that’s more or less Cthulu, and a trio of Leaguers get in their way.

[Bonus: the “Defenders” return in JLU Season 1, Ep. 11: Wake the Dead, along with Amazo playing the cosmic role of Silver Surfer and Hawkgirl perhaps acting as Nighthawk]

One thought on “Justice League Animated Hits Netflix; Here Are Our Top 10 Episodes”