The Thing franchise has gone through many changes. From 1950s B-movie, to the 1982 John Carpenter classic, and then to prequel it captures sci-fi fans imagination. Now we get a comedy version! Here we have Night of the Creature. Directed by Alex Jacobs, the short stars Ron Babcock, Ed Salazar, Russel Stepan, and Solomon Georgio all trying to figure out who is an alien. The movie takes on the famous blood testing scene from The Thing, only this time it plays out slightly different from you may think.

Grizzly Bomb is a big fan of the The Thing and it seems so is writer and producer of Night of the Creature Adam Murray. Speaking with Dread Central, he had this to say on his reasoning’s for making this short film.

“When I was ten, I watched The Thing on TV at 2 am, during a blizzard, and it scared me so bad that I didn’t watch it again until I was eighteen,” he explained. “It’s one of my favorite movies now, and I’ve been wanting to make a short inspired by it for a long time. Since moving to LA, I’ve become friends with a lot of talented people who were also excited to make this short actually happen.”

On the creation of the creature itself:

“Russel is a make-up and prop artist, and he made the jacket with all the teeth that’s in the short. Lawrence Mercado and Chris Korn are also make-up artists with whom I’ve worked on a lot of projects. They did all of Russel and Ron’s prosthetics and teeth and added some grossness to the jacket.This literally wouldn’t have been possible to make if it wasn’t for all these people and our crew. I think we did a pretty great job of capturing the tone and look of The Thing, even though it switches to comedy in under 30 seconds. John Carpenter still hasn’t responded to any of my e-mails.”

Using the same lead up as in the movie, Jacobs and Murray give us a funny look at how this all could have unfolded if bitterness got in the way. From a personal view it’s hard to knock a guy for not wanting his VHS tape back! It has the right balance of comedy and horror to make it a fun little movie, and the general stupidity of it adds a certain charm to the proceedings, even if it does not end well. For a short sketch it has some surprisingly good special effects and manages to get a bit of gore into its short running time. The gallery below shows how some of them were created. 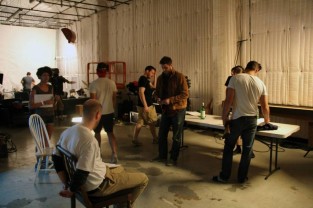 Murray has thee other videos of Grizzly Bombs interest as well. One is Crime Sceners: Evidence, which showcases the handiwork of a killer by the name of ‘Night Wolf.’ He leaves some damning evidence behind, and a twist in the tale reveals a comedic finish.

The next video Nebulas instantly got my attention just because of the VHS style filter it uses. It again mixes the knowledge we have of those shot on video science shows most of us have watched in school at some time, with another twist ending.

But my personal favorite has to go to The Legend of Beast Lord. A village in peril is amazed when a warrior arrives to help them out. Alas a lack of respect for the warriors name by the villagers means trouble for Beast Lord. This is obviously a parody of the ’80s fantasy classic The  Beastmaster, where our hero uses his communication skills with animals to solve the land’s problems. But Marc Singer never had this much grief when he was helping out the mistreated.

You can see more from director Alex Jacobs at his site, and you can check out Adam Murray’s YouTube channel too. But if you still have a hankering for even more The Thing related action, then you should look at the soon to be released Harbinger Down movie, which pays homage to The Thing by taking that template and putting it on a sea vessal. If you need a more immediate fix, then you can always check out some of the videos below. One is the story of The Thing done in Claymation with a cat. There is also a variation of this by the same guy which has children’s TV character Pingu in the lead role! Creator Lee Hardcastle has done a ton of these videos on his YouTube channel.

There is also the fan film The Thing 2, which on a very low-budget gives us some incredibly fun special effects.

Be sure to check in with Grizzly Bomb to get the up to date news on other exciting fan made movies as they arrive.