After what seems like a decade of waiting and endless fanboy speculation, Bryan Singer has finally announced via Twitter the official trio starring in X-Men: Apocalypse as younger versions of Jean Grey, Cyclops and Storm.

The new cast members include Game of Thrones Sophie Turner as the telepath Jean Grey, Tye Sheridan from The Tree of Life as the team leader Cyclops and Alexandra Shipp of Lifetime’s Aaliyah: The Princess of R&B biopic as the weather witch Storm.

Admittedly, I don’t know about you, but my fanboy engines are on overload with the thought of Sansa Stark rocking telekinetic and telepathic abilities. Sophie has thrived in her role as Sansa, growing from a timid, emotional punching bag, to a confident young woman who has learned the way Westeros truly works. There’s something to be said about that type of evolution and it’s fitting for Jean and her myriad of evolutionary changes, such as her future destiny in The Phoenix Saga. It is safe to say we’re looking forward to Sansa’s portrayal.

Tye Sheridan is an intriguing choice out of the newly announced trio. Appearing alongside Brad Pitt in the Terrence Malick film The Tree of Life, he may be wildcard of the lot. He also starred alongside leading men Matthew McConaughey in Mud and Nicholas Cage in Joe, so we’ll surely keep our eye on his take as the future leader of the X-Men.

Lastly, Alexandra Shipp will take on the role of fierce, weather witch Storm. The Aaliyah biopic she headlined certainly drew its fair share of criticism from viewers, so it’s hard to gauge Shipp’s talent amid that mess. However, a new leaf for Storm is certainly what the franchise needs, so let’s hope we won’t be hearing any awful “struck by lightning” quotes in this reboot of the character. Considering the Apocalypse storyline will take place in the 1980’s, there’s a chance we’ll get to see “Punk Storm”, and if done right, it could be a grand redemption for the mistress of the elements. We just may be okay with that. 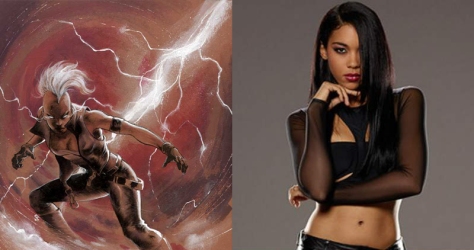 In addition to Oscar Isaac’s inclusion as titular villain Apocalypse, the cast looks to be near complete, as we’ll see the newly announced on-screen with returning leads Michael Fassbender, Jennifer Lawrence and James McAvoy to round out the Apocalypse cast.

So what are your thoughts on the new cast? Are you in favor of the trio?