With Avengers: Age of Ultron surfacing in less than two weeks and a sea of hungry fan boys and gals waiting with baited breath, Marvel has finally bestowed the second Ant-Man trailer on us, and needless to say, we’re buzzing about it.

Following in the footsteps of Guardians of the Galaxy, Ant-Man should have no shortage of laughs and super-powered hijinks, while still keeping up with the action-packed pacing of the Marvel Cinematic Universe. This time around, the trailer gives fans a more detailed look at the plot, and more explosive action.

Paul Rudd, plays the central role of Scott Lang, an ex-con looking for redemption that’s enlisted by Hank Pym (Michael Douglas) the original Ant-Man and creator of the size-altering Pym Particles. He is recruited in order to defeat Pym’s former protegé, Darren Cross (Corey Stoll), Yellowjacket.  (And might we add, how bad ass, Yellowjacket’s suit is?) 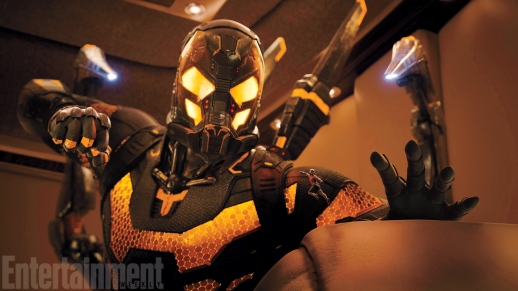 “My days of breaking into places and stealing stuff are over. What do you want me to do?”
“I want you to break into a place and steal some stuff”

If that doesn’t do it for ya, perhaps Evangeline Lily’s Janet Van Dyne teaching Scott how to “punch” will. Either way, it’s clear this film won’t take itself too seriously. That said, there’s a no holds barred on the level of action as seen in the trailer. That Thomas the Train engine action sequence, definitely looks to be a highlight!

It’s still unclear though how Ant-Man will connect to the rest of the MCU. Strategy, no doubt on Marvel’s end – but it’s safe to say that Ant-Man may have eased speculated viewers on this film being a train-wreck. Hey, if Marvel can pull of a gun-toting raccoon and the world’s most lovable space tree, then I think a microscopic suit equipped with ant communication isn’t all that unbelievable