Who would have thought that Mad Max would return in such a triumphant fashion?

But he has. 25 years after his so so swan song in Mad Max Beyond Thunderdome, he has returned with a new face (Tom Hardy instead of Mel Gibson), but still keeping the same director George Miller, who now knocking up 70 years on this Earth has still managed to knock out one heck of a movie. If you have not seen it yet then do, because it is an adrenaline ride like no other. Referencing back to the trilogy of movies before it, but fresh enough for people new to the world of Mad Max to jump in on, it has a visual style unlike no other and a great cast; including some strong performances all round.

So strong has the reaction been for this movie that talented YouTube users, computer whizzes and film makers have got on their computers and had a bash at creating their own take on this movie. Below is a selection of a few of my personal favorites (in no particular order). Don’t worry though people, there are no spoilers here, just revamped trailers and funny revamping’s of this amazing movie. So get yourself jacked up on Chrome Spray and grab your favorite steering wheel, because we are about to go Mad Max crazy! 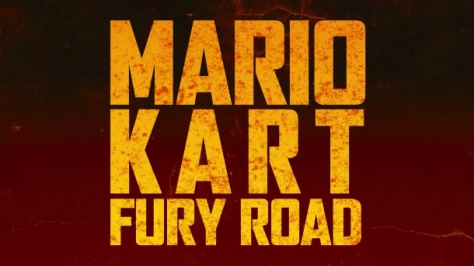 What do you get when you cross George Miller’s view of the future, with Nintendo’s hottest property? Mario Kart: Fury Road that’s what. It is almost to perfect this combination of road violence and Mario related shenanigans. YouTuber Kris Sundberg has taken the trailer for Fury Road and tweaked it to incorporate Mario Kart elements. So Mad Max now wears a red suit, cars get mashed up by bananas and Bowser image adorns the landscape. Oh and watch out for the Chain Chomp to which has a fondness for cars. The Mario Kart elements have been seamlessly added to this trailer and give it an incredibly light-hearted tone. It also makes it flipping hilarious! In the original trailer seeing some of the wild boys get whipped up in a sand storm is dramatic and shocking. Add a lightning bolt and a Waluigi voice to the proceedings and it becomes something else entirely!

Mad Mac And Me

Bit of an odd one this, but still a great piece of fun if you know the film it’s referencing. Mac and Me was a 1988 E.T rip off which was done on a minuscule budget and was as cheesy as heck. Still the memory of the movie holds fondly in the hearts of 80s movie goers and if you are up for a so bad its good movie it is a right good laugh. However this feel good family comedy is not exactly what you would expect to go hand in hand with Max Rockatansky ferocious world. But just like Mario Kart before it this trailer has been sliced and diced and now focuses more on this plucky aliens fight for survival, which now seems even more dramatic with the voice over from Fury Road put on top of it. Just like Mario Kart: Fury Road it blends together perfectly and creator Brian Mann has done a superb job of matching these two movies together to give us Mad Mac and Me. You will never look at a Mysterious Alien Creature in the same way again.

Now Nick Bosworth must be a fan of the last Mel Gibson made Mad Max movie because he has used his editing equipment to create the music video mash-up that you never would have expected. Take the song We Don’t Need Another Hero, remove Mel Gibson, add Tom Hardy, keep Tina Turner and mix together. What do you get? This new music video retains Tina’s bonkers costume, but gives us all the fun of Fury Road. The fluidity of the music video is still retained and in some scenes it’s odd to imagine Tina’s very 90s styled track belting away over the extreme visuals of Tom Hardy’s Mad Max. But again it works and it is a quirky little video all fans of the franchise should check out.

Unbreakable Kimmy Schmidt was a fun Netflix exclusive show about a group of woman who escaped the clutches of a cult leader who had them living underground for most of their lives. Now writer Tina Fey (of 30 Rock fame) has her finger on the pulse and incorporated numerous pop culture references into this show. In fact the first episode pays homage to an internet character who appeared on a news show very distressed about a certain person’s activities. Well it seems that Albert Lopez has taken this scene and added his own spin onto it, giving Fury Roads very own Furiousa the lime light instead of Kimmy. So sit back and delight in one man’s joy at this strong woman’s actions!

Part ’70s grindhouse, part 80s VHS synth magic this reworking of the Mad Max Fury Road trailer is pure retro gold. With a new, more exploitative sounding voice over and a grainy film added over the original trailer this looks like something you would find at the start of a video rental back in the day. Now there are a few of these VHS related trailers out there already (you can see some of them below) and they are all awesome.

YouTuber The PLAYBACK Collective has put his piece of work right up there by giving us all this great retro trailer which has a feel all of its own. If you liked flaming guitar man then you will love the synth pop rock sounds that come out of this new trailer! The VHS styled cover above is a creation by Chris Weston and it perfectly fits with the trailer below.

Finally I will leave you with this little short, not a YouTube created video, but a bit of a giggle never the less. Ever wondered what it would be like if Patton Oswalt joined the cast of Mad Max: Fury Road? Probably not, but Conan O’ Brian has very kindly given us a glimpse into this with his own show showing a never before seen deleted scene from the movie. Seems Patton had the great task of keeping the troops warmed up. Sadly for him his scene hit the cutting room floor, but you can see what you make of it all below!

With the new fire Fury Road has ignited, it is no doubt in my mind we will see more adventure with Max Rockatansky and his petrol fueled nightmare of the future. Much like his post apocalypse realm there is hope, but the hope for us is that we get tons more movies like this and a whole heap more mash-ups following suit. Remember to check out Grizzly Bomb for all your feature film news.