If you are of gamer of a certain age, there is a good chance you remember King’s Quest. A stalwart in the adventure game history, King’s Quest has returned with a new chapter.

Some of my earliest gaming memories involve King Graham. Well, King Graham and Lee Trevino of Lee Trevino’s Fighting Golf, but I sadly don’t see a revival of that title anywhere on the horizon. I spent countless hours of my youth with these two men. And, as nostalgia is wont to do, my memory of those early Sierra games is rich. The graphics were lush, the music incredible, and the storyline void of plot holes.

It is with frame of mind that I enter this new world of King’s Quest: A Knight to Remember. This revival of the classic was released by Sierra Entertainment, The Odd Gentleman, and Activision.

King Graham is now a grandfather and for those who were older teens and adults in 1984 when the first King’s Quest game came out, this is possibly a familiar role. So to tie that original audience in with a newer one is a nice touch. Plus, who can resist a grandfather telling tales? Especially when that grandfather is a big fan of puns. 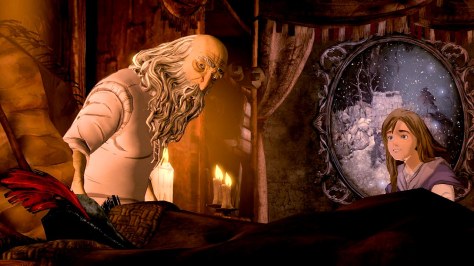 The grandfatherly Graham is sharing stories with his precocious grandaughter Gwendolyn who, despite hearing the stories countless times before, hangs on his every word. The audience will, undoubtedly, get a strong Princess Bride vibe from King’s Quest,  but thankfully it doesn’t reach the point that you expect rodents of unusually large size to jump out at any moment. However, it does lend a sweetness that borders on saccharine, but finds a way to keep it underneath a palatable threshold.

If I felt the graphics of the game of old were good, this new chapter is mind-blowing. Even without the comparison to earlier games, the new King’s Quest is beautiful. There were numerous times as I played that I had to take a moment to appreciate the art. Particularly in one of the first few moments after escaping the underground dragon lair, you are treated to a view of a mountain scene that is breathtaking. As you can see above there is a definite style when it comes to character animation, but outside of a few characters (Merchant of Miracles, I’m looking at you), it works. Even in today’s world of hyper-realistic CGI graphics, it works.

Perhaps more impressive than the art, is the voice actors this production brings together. Christopher Lloyd as the storytelling King Graham is instantly recognizable and brings familiarity to the role. We know that voice, we love that voice; that voice has ushered us through many adventures so we have no problem going with it once again. Perhaps not as immediately recognizable, but you’ll get there eventually in a “Oh my god I totally know that voice!” moment, is Wallace Shawn.

Shawn doesn’t have as integral a role as the titular King, but that doesn’t make his contribution any less entertaining and amusing. Of course, this does nothing to quell the Princess Bride associations.

Any look at a game would be incomplete without talking about gameplay. And any look at a King’s Quest game would be incomplete without mentioning how often you have to save. If you were a child like myself playing those early King’s Quest adventures, you know exactly why this is. Those games were not easy. There is a reason I remember playing them so clearly; it’s because I spent hours trying to pass a section that involved a wall.

Thankfully (I suppose that could depend on who you ask) this is no longer an issue. If you die or make a “bad” decision, you simply hit a loading screen and go back. In fact, I would encourage you to make bad decisions because unlike other adventure games which will have a generic response, King’s Quest has a seemingly unending response to these situations. My favorite would be the first time I got crushed by a falling bed, and got a loading screen accompanied by the young Gwendolyn exclaiming, “wait, are you saying our family is immortal?!?!” It was quite amusing, and I didn’t feel quite so dumb being killed by a bed. 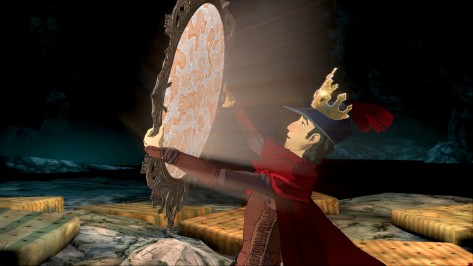 There are moments where the game feels a little boring. Whether this is a product of the game itself, or my own current gaming situation filled with fast paced first person shooters and the like, I can’t say, but it does have a tendency to plod along a bit at times. Thankfully, even while plodding, it is pretty to look at.

All in all, this new King’s Quest is a worthy new chapter in the legendary story. The first chapter was released on July 29 with four more chapters to follow. The price is $40 for the entire collection, or $10 per chapter. It can be found on PC, XBox 360, XBox One, PS3, and PS4.

There has been no mention of it yet, but perhaps if King’s Quest sees good numbers, might we get a Space Quest revival? Fingers crossed!