Jacob Kurtzberg, better known as Jack “The King” Kirby, passed away back in 1994, but he would have been 98 if he’d lived to today. In honor of that birthday, we wanted to put out a list of his 98 best creations . . . which would have represented a very, very small percentage of his output. And with such a rich catalog, a best of list is very, very hard to put together in any methodological manner.

Instead, we thought we’d share our favorite Kirby creations in a slightly more digestible list, which ranges from the weird to the heroic, from the goofy to the outlandish, from the innovative to the arch-evil – yet are, to an item, wonderfully creative: 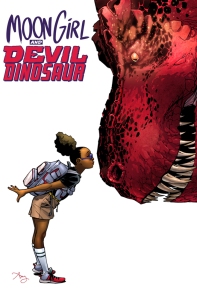 The savage affairs of a proto-human slightly evolved beyond his peers and a giant red dinosaur only lasted 9 issues, but the fact that an updated version of this title is coming soon to the new Marvel U (albeit now “Moon Girl“) points to Kirby’s timeless ideas and flexibility in launching titles in any genre. Amy Reeder’s take on Devil and his new friend pictured. 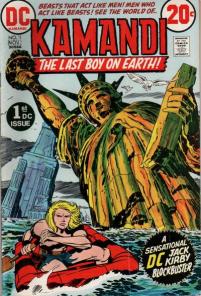 The Last Boy on Earth thrilled audiences to a sci-fi, post-apocalyptic world full of weird Kirby creations, largely in the form of anthropomorphic animals.

Godzilla proportions, totally silly name, fantastic beard-like growth on his chin . . . what’s not to like about Fin Fang Foom? One of the many monsters Kirby can claim to have had a hand in creating (another, more recently popularized on is Groot from Guardians of the Galaxy).

The Fantastic Four (with Stan Lee)

The iconic super-team, the science heroes, the First Family of the Marvel Universe to this day (despite lackluster movies).

We have love and friendship, villainy and rivalry, triumph and tragedy (This Man, this Monster, right), with intimate relationships and larger-than-life adventures. Galactus, anyone? 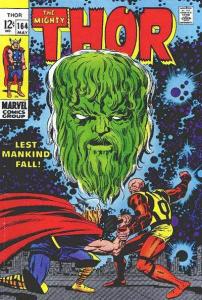 A villain for Thor who later needed the Thunder God’s help, Ego the Living Planet is just that. A planet with a beard. Naturally, it was Galactus, the Devourer of Worlds, who he needed Thor’s help to battle. Cosmic and goofy. What’s not to love? (See image at the top of the story)

Not a character, but Jack Kirby’s signature way of depicting energy. And really representative of the motion and movement that Kirby was able to impart with his pencil. So kool.

This was one of our very first comics – found in a back-bin, and treasured for the robot’s weirdly human features and odd telescoping limbs. Machine Man is who we first thought of when we heard the concept of “uncanny valley” – just human enough that the differences seem grotesque. But you couldn’t help but root for the robot in his struggle against military goons.

Sentinel of Liberty. Punching Hitler. Accusing people of being diaper-wearers. We love you, Cap. (Okay, this panel is Stan Lee and Don Heck, but c’mon, it’s still Cap, and too good not to post).

The Hulk (with Stan Lee)

Reinterpreting Jekyll & Hyde for the atomic age, Kirby’s depiction of the Hulk in his own title and briefly in The Avengers was stubby and kinetic; you can almost feel the shockwaves coming off the page. 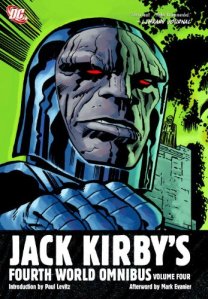 Split between several titles (Superman’s Pal Jimmy Olsen, The New Gods, Mister Miracle, The Forever People), Kirby’s Fourth World project is chock full of incredible characters, weird designs, Hunger Dogs, The Armagetto, and, of course, served as the basis for the Super Powers action figure line. But the head of the Fourth World class is Darkseid, an epic villain for the ages.