Well, viewers who missed The Iron Giant at the theater the first time around are in for a treat. Warner Brothers Studios announced in July that it’s bringing back the beloved animation to the big screen. Fans of the original movie will want to check it out as well. Not only has Iron Giant been re-mastered to look better than ever, there are several new scenes . This gives a more action-oriented vibe to the film, making it even more a match to transforming rival flicks.

Check out the trailer here;

Called Iron Giant: Signature Edition, this new version is scheduled to play on September 30 and again on October 4 (Check you local listings for the times and locations). For those who can’t make it to the theater, don’t worry. Fans up in the Great White North can catch Signature Edition at the upcoming 2015 Toronto International Film Festival, and it will be available on Blu-Ray in 2016. Warner Bros. has announced it will give more specific dates before the end of this year.

With Iron Giant: Signature Edition set to hit the theaters, does that mean there’s a possible Iron Giant II coming out soon? Or at the very least in the works? Could be. Actor/Director Vin Diesel, whose voice is that of the titular metallic monolith, wrote the following underneath the trailer on his Facebook page:

Not surprisingly, Warner Bros. is mum at the possibility of a sequel at the time of this writing. But Diesel’s words definitely have fans like yours truly speculating on the sequel’s possibility, and how it can be done.

Finally, we’re stoked to hear that Funko is releasing an Iron Giant with Car Pop! Vinyl figure. Measuring 3 3/4 – inches tall, the figure is based off the famous junkyard scene in which the Iron Giant is holding the red car with Hogarth in it. 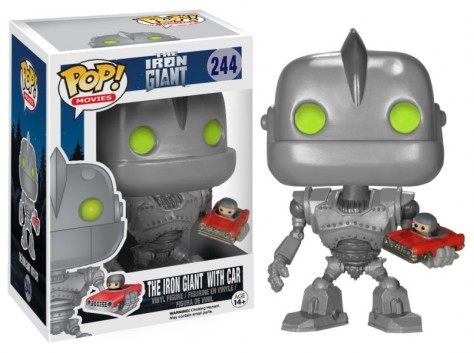 Going on sale in November, it’s already available as a pre-order on Entertainment Earth’s website. Fans – and those who love them – would love the Pop! figure as a real early holiday gift, especially after seeing Signature Edition in the theaters (hint, hint).

One thought on “From the Scrapheap: Iron Giant Remastered, Returning to Theaters and Toy Stores”