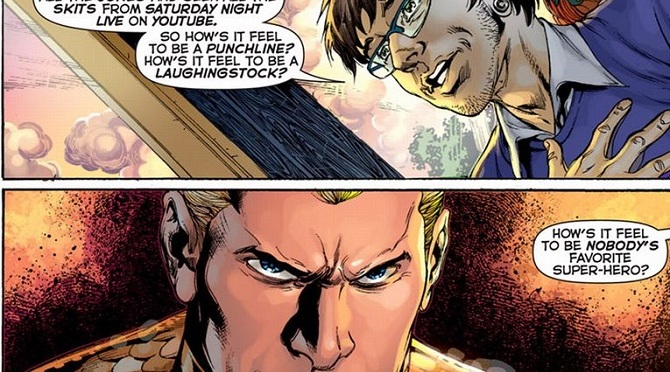 Aquaman has endured years of mockery. Even in the pages of his own comic he has not always been appreciated for the powerful hero he is. Well, Jason Mamoa, who will take on the role in the upcoming Batman V. Superman: Dawn of Justice, the subsequent Justice League movies, and the eventual Aquaman stand alone, has a few words to say about how fans view his character.

“It’s cute and funny. People make fun of him,” Mamoa told the audience at this year’s Fan Expo Canada, ” There’s a bunch of jokes about him, but I’m like, ‘Just wait. Let’s just wait a little bit, and then you can make jokes.”

The images released of the newly re-imagined Aquaman have already given the impression we are going to be dealing with a very different king of the sea than the Golden Age Aquaman most people recognize.

The blond hair and blue eyes have been replaced with a more island-centric, Polynesian warrior vibe. Mamoa, whose father is a Hawaiian native, seems to embodied a richer Atlantian, island inspired culture, which in and of itself will give the character whole new layer.

“We don’t want to just reinvent it, but [Zack Snyder has] got a whole idea of what Aquaman should be and I’m really honored to be playing it. I’m excited for the world to see it.”

The new version of Aquaman will still stay true to some core elements of the character. Die hard comic fans will know that Aquaman, despite being a laughing stock in the general media, is actually one of the most powerful members of the JLA . His character has evolved well beyond the basic “talks to fish” powers he had in the golden and silver age comics, having been re-imagined, to a degree, in DC’s ” New 52″, he is virtually bullet proof and wields one of the greatest weapons in comic history.

Fans should be happy to hear that director Zack Snyder has confirmed Aquaman’s Trident, one of the Seven Relics of Atlantis, with which he can rule the sea and, if necessary even take Superman down a peg, will not lose any of its power,

“The cool thing with Aquaman is his trident – people don’t realize that can actually cut the flesh of Superman if they came in contact. That’s a thing that’s in the canon.”

Bringing an element of the ancient cultures of the sea melds well with a more modern way of viewing our heroes, and Mamoa is the perfect actor to usher in a less anglo-centirc version of a character that has been around since the 1940’s. Mamoa’s own Hawaiian culture is even represented in the characters armor and tattoos.

Mamoa explained the significance of his own ink, which mirrors the design used for Aquaman’s armor and body art, in an interview with Inked magazine,

“It’s something my cousins all have, and it goes on the left side of your arm—it’s like a guardian. It’s basically like your power animal, whatever animal represents your family or your tribe. And ours is a shark, a mano. And then there are arrows that face out—out of your heart, that’s what it represents.”

While bringing Aquaman to life on the big screen, Mamoa’s cultural pride has made him a bit of a real life hero in his home state of Hawaii. Just this year Mamoa stood with environmentalists and his people in a fight to stop the destructive construction of a telescope atop sacred land on the island of Oahu. Aquaman would be proud

WE ARE MAUNA KEA The ocean embraces her. The land bows before her. Her reach extends to the heavens. Within her care lies all that is essential for life. WE ARE MAUNA KEA! Please click on the link in my profile to sign the petition and stop the construction of TMT and learn more. #wearemaunakea #protectmaunakea Tat yourself. Send it to the world Aloha jason namakaeha momoa

Aside from a desire to represent island culture, Mamoa’s few comments on the character lead to the impression that Aquaman will not only be a bit rougher than audiences might expect, but may well convert long time haters. The ultimate question remaining, whose side will he choose? In the comics Aquaman has lead the Justice League himself, so will he side with natural leader, but overly nice Superman, or join butt kicking forces with Batman, defender of Gotham?

Still laughing at Aquaman? Let us know what you think in the comments below or visit our Grizzly Bomb Facebook page.