Marvel Comics and parent company Disney famously took the Star Wars ball home away from from Dark Horse, which had been publishing the Star Wars licensed comics for more than 20 years. They also established the Lucasfilm Story Group (LSG) to determine the way Disney will approach story continuity — subjecting the Star Wars Expanded Universe to the chopping block; a lot of the novels, comics, video and role-playing games, and other non-movie properties have been wiped from official existence (though that shouldn’t stop you from enjoying them).

Ironically, this group has invalidated some of the stellarly goofy stuff Marvel Comics itself established back when it first had the Star Wars license. Case in point: Marvel Comics’ Star Wars, issues 8 through 10, brought to us by a creative team that included comics luminaries Roy Thomas and Howard Chaykin (plus Don Glut in #10). 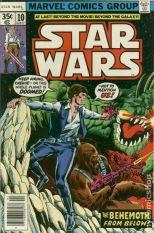 The story is an homage to Akira Kurosawa’s Seven Samurai. Han Solo and Chewbacca agree to defend a village of peasant farmers from The Cloud Riders — bandits who take a yearly “tribute” that keeps the village in poverty. The Cloud Riders also use the occasion to carry off villagers’ wives and daughters for their own amusement. Han and Chewie gather a team to assist in the mission.

Sergi-X Arrogantus is the leader of these bandits, whom writer Roy Thomas based visually on Sergio Aragonés — creator of Groo the Wanderer and stalwart Mad magazine contributor.

Jaxxon is an anthropomorphic rabbit who’s a wise-ass — a lot like Bugs Bunny. Plus he’s green. 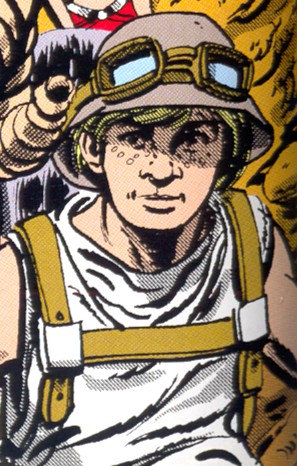 The Starkiller Kid, aka Jimm Doshun – A young man who brings his tractor-tread robot FE-9Q along for the ride, but his name is an homage to the original name for Luke Skywalker, who at first was called Luke Starkiller.

Don-Wan Kihotay is a delusional Jedi wannabe named after Cervantes’ signature creation. The story takes place during the time when Jedi knights are very scarce, so his fantasies are far more preposterous than some other Star Wars settings; the Old Republic, for instance, which has Jedis aplenty.

Throw in a porcupine man and shady lady with a mysterious past, and your Magnificent Eight are ready to party.

The possible Godzilla analog, the Behemoth from the World Below, shows up later. The elder of the village that Solo and company are trying to protect summons the great reptilian beast from out of the earth, who repels the invaders yet ultimately turns against the heroes. This potential homage isn’t as clear cut, but Godzilla himself enjoyed many a Marvel Comics appearance, so it’s not out of the question that  he would show up in some analogous form. You be the judge:

Behemoth from the World Below

Spoiler Alert: Porcupine spines aren’t much use against kaiju.

If this story is cannon or not (it’s not), it’s pretty fun. Have you read it? Let us know in the comments, or on our Facebook and Twitter.

If you liked this, then you might be a fan of Chewbacca (who isn’t?) and he has his own book about to release, or for more vintage comic book stuff from Mr. Nisen how about something on the old Hostess comics?

One thought on “Comic Flashback: Marvel Does Seven Samurai, With Han and Chewie”