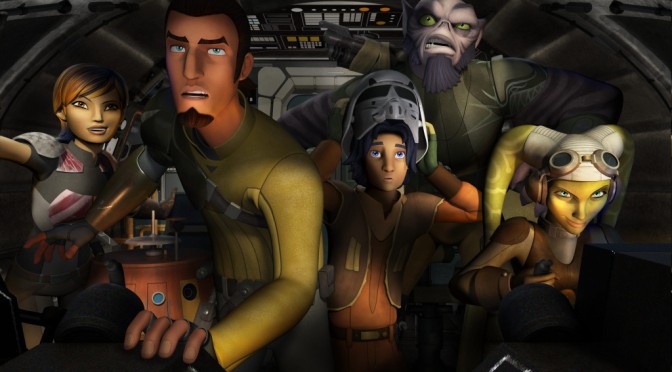 ** The following contains spoilers if you have yet to see the first season of Star War Rebels or the “Siege of Lothal” mini movie event that aired in June. You’ve been warned, read at your own discretion**

The last episode of last season, Fire Across the Galaxy, along with mini movie event, Siege of Lothal, which aired back in June both saw the return of previously established characters in the Star Wars galaxy. Tonight’s episode will keep with that trend when the crew of The Ghost is sent to find an old Clone Wars veteran, Captain Rex, in hopes that he can help them. You can imagine this might be a hard pill to swallow for Kanan considering the clone troopers were largely responsible for carrying out Order 66 and wiping out the Jedi Order in Revenge of the Sith.

On the whole this upcoming season is sure to be a tumultuous one for our heroes. We now know that Hera’s Rebel contact from last season, Fulcrum, is in fact Ahsoka Tano from Star Wars: The Clone Wars. In Siege of Lothal we saw Darth Vader enter the fray as he dramatically confronts Kanan and Ezra while they’re on a mission for the newly born Rebel Alliance. This on its own should be a very compelling story line considering that Ahsoka was Anakin’s padawan before his descent into the dark side and becoming Darth Vader. It’s a pretty safe bet that we’ll see the two of them cross lightsabers at some point.

Seriously, you’ll want to tune in. Check out the new trailer that dropped at New York Comic Con last week:

So Star Wars fans, have you been watching Rebels? Excited for Season 2? Have some predictions for the new season? Be sure to leave a comment and let us know!

Want more Star Wars news? Take a gander at our thoughts on this weekends beta test of Star Wars Battlefront! Also be sure to keep up with our Countdown to Halloween with a look at the trailer for The Boy featuring Lauren Cohen from The Walking Dead!