Well Christmas is fast approaching and with the festive season comes many things for many people. Presents, time with the family, great food and Xenomorphs? Yes if you are an Alien fan, then Christmas is going to be especially exciting this year with NECA releasing a brand new collectible of the first Alien from the 1979 Ridley Scott movie, amusingly nick named “Big Chap”.

Now this isn’t the first release of H.R.Giger’s iconic creation. Heck it is not even NECA’s first release of these acid bleeding creatures. Back in 2014 NECA released some great Alien based figures.  Below are a few of the figures from that great line up which included some great sculpts of characters from the first two Alien movies.

The difference with NECA latest release is the sheer size of the thing. Standing tall at 22 inches tall it towers over you and with the attention to detail you expect from a NECA release, you can almost feel the rancid breath and slime dribble down your face as it stares you out! Luckily for us  there is no saliva releasing option on this figure but it does have some impressive specs.

Out of the original 1979 movie that shocked audiences and jumpstarted a legendary film franchise, the xenomorph known to fans as “Big Chap” is now a deluxe action figure. This Alien 1:4 Scale Action Figure stands over 22-inches tall and has a hinged jaw that opens to reveal an inner mouth that extends for realistic movie action! There are nearly 30 points of articulation, including double knee joints and a bendable tail. Extra attention has been paid to all the eerie details that made H.R. Giger’s designs for Alien so mesmerizing. This is the perfect large-scale action figure for the Alien fan in your life!

As you can see below the detail on this is spot on and for the retail price of $100 (or there about) it is well worth the investment. 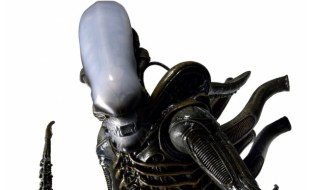 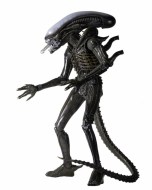 You can pick this terrifying creation up from Entertainment Earth this month. So why not treat a close Alien loving friend to a treat by picking up this piece asap. Or sneakily drop hints to a loved one that this would make your day if it jumped out of your stocking this year.

Still want more Alien action? You should look at Sideshow Collectible Space Jockey figure.  Want to know what is happening with the Alien franchise? Then Grizzly Bomb has the scoop on Prometheus 2.  Finally you can watch this great short feature all about the Xenomorph’s most hated enemy the Predator in Predator: Dark Ages.